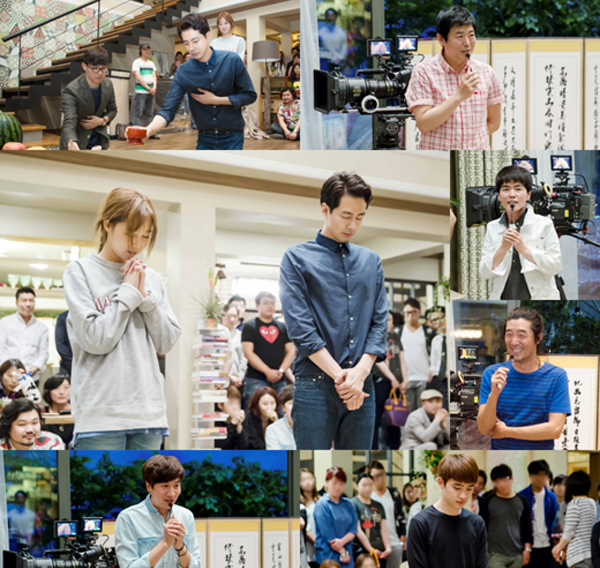 SBS revealed a photo yesterday from the gosa, or “good luck ritual” done by the production team of the upcoming drama “It’s Okay, It’s Love,” held in Gyeonggi last week. The pictures featured the lead actors Zo In-sung, Kong Hyo-jin and Do Kyung-soo aka D.O. of K-pop boy band Exo.

Though it may seem bizarre to foreigners’ eyes, many Korean film and drama production teams still hold shamanistic rituals, in which they pray to the spirits in order to fight off the misfortune in the team, and ultimately wish for good luck, or high viewership.

“We hope there wouldn’t be any problem in our shooting schedule,” said a member of the SBS team in front of an altar, “and please make everyone love our show!” Everyone laughed.

“I’ve never been with better crew members than you guys, thank you everyone; I’m the luckiest one!” said producer Kim Kyu-tae, who was behind last year’s drama series “That Winter, the Wind Blows,” starring Zo In-sung.

Kong Hyo-jin smiled, and continued the feast; “I am also happy to work with the ‘dream team’ of the Korean drama industry.”

On the other hand, the 21-year-old Korean Wave heartthrob D.O. pleased the staff members by dancing to his group’s song.

The first episode starts on July 23.