A self-portrait of Lee Hyun-se.

No one would argue that cartoonist Lee Hyun-se, 60, is not a Korean cartoon legend. He was one of a few artists who brought a renaissance to the Korean manhwa, or cartoon, scene back in the 1980s with his baseball series “A Daunting Team” (1982).

With few forms of entertainment around, “A Daunting Team” instantly captivated teenagers and delighted adults, who considered cartoons a thing for children back then.

Drawings of the protagonist Oh Hye-sung were pinned up on the walls of many adolescents, alongside photos of popular singers and actors.

Oh, whose nickname is Kkachi, is a wild and underprivileged teenage boy who begins to play baseball after being persuaded to by his long-time friend Eom-ji. Little to his knowledge, however, he is to encounter Ma Dong-tak on the field, his archrival who has everything from talent to a good family.

Oh and Ma lock horns with one another over who is the best baseball player, but their rivalry continues outside the baseball field when Ma tries to woo Eom-ji, whom Kkachi has been admiring for a while.

Because Eom-ji seems to be interested in Ma, Kkachi gives it his all to beat Ma at baseball, with the help of his outcast teammates.

With the serialization of “A Daunting Team,” Lee instantly soared to stardom and became one of the most beloved, successful cartoonists in Korea.

By completing just one or two cartoons, Lee could earn enough money to buy an apartment in Seoul.

Lee’s life, however, wasn’t smooth until he became a star cartoonist. His early days resemble Kkachi’s.

The JoongAng Ilbo, an affiliate of the Korea JoongAng Daily, recently sat down with Lee to talk about his upbringing and career, which spans more than 30 years. 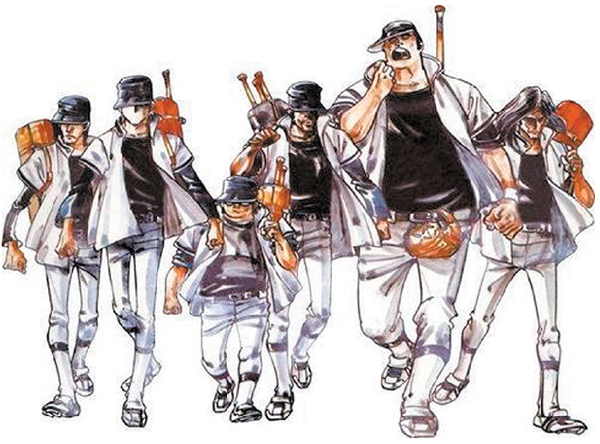 A scene from “A Daunting Team,” one of Lee’s greatest hits

Q. Tell us about your childhood days.

A.I think my life was abnormal from the beginning. My uncle had no son, but my grandmother wanted him to carry on the family lineage because he was the first son. My granny registered me under my uncle as soon as I was born and I grew up thinking my biological father was my uncle until I turned 20.

My family also had a hard time because my second uncle joined the North Korean People’s Army during the [1950-53] Korean War. Because of that, our entire family was labeled as [leaning to] the left. Ever since then, we had to learn how to survive. My parents and grandmother never told me to become a great person or become a good boy who keeps promises. We couldn’t even mingle with other relatives because of the fact we were Communists to others.

Deep down in my mind, I had this distrust towards people. Looking back, it was an environment in which a child couldn’t grow normally.

How did you end up drawing cartoons?

My goal was to get into art college, but I realized I had a partial inability to distinguish colors right before filling out college admission forms. Ever since my uncle joined the Korean War as part of the North Korean army, I had few choices in my life, and I couldn’t even apply for colleges other than art colleges. People with color weakness couldn’t apply for art colleges back then. I think God made me draw cartoons this way.

I began working as an assistant for cartoonist Nah Ha-na in 1974. The first thing I learned from her was drawing romantic cartoons.

Back then, cartoonists didn’t write stories - they just drew. But you did both from the beginning of your career.

I worked under cartoonists who only drew. They were excellent at drawing but none of them wrote narratives. But I was interested in making up stories, so I was less influenced by my seniors. I was working for them but wanted to do something else, and I happened to land a job in 1975 at a culture magazine for children and teenagers. The magazine had a special edition that compiled cartoons from the United States and Japan. I adapted the cartoons for Korean readers, and I began copying and drawing cartoons like “Batman” and “Spiderman” and other Japanese cartoons. I enjoyed analyzing popular cartoons with the editorial team. As I worked on adapting foreign cartoons, I could enjoy various genres and drawings, which helped me widen my scope of cartoons.

Your early life was quite turbulent, but you had a good career until “Mythology of the Heavens” was labeled obscene material by the government because of its numerous and violent sex scenes.

It was 1997. If I gave up just by paying fines and ended the controversy, I wouldn’t be here today. I had faith in my work as an artist. I also lied about my educational background. After I became famous with “A Daunting Team,” I told one reporter that I dropped out of college during the first interview I did with media, and it tormented me for 25 years. When I published the new cartoon series “Buddy” in 2005, I gathered up my courage and told the truth about my educational background in the preface. I became free of the issue that haunted me for so long. Looking back, my biggest trauma was not that I didn’t have a college diploma but that I tried to hide the fact I only have a high-school diploma. 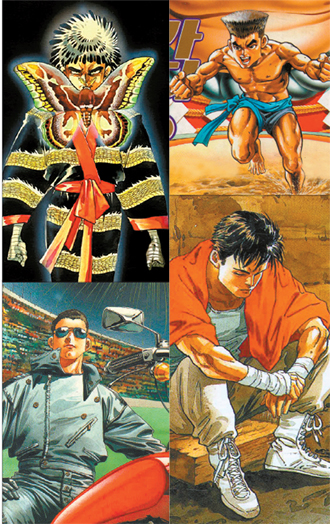 You were diagnosed with lung cancer two years ago and are still fighting it.

Yes, right. I also suffer from diabetes and myocardial infarction. I underwent surgery for the lung cancer in 2012 and tried to recover by refraining from alcohol.

You have three children. Do any of them want to become a cartoonist?

None of them wanted to draw cartoons. My first daughter and youngest son work for advertising companies, and my second daughter designs stages for performances and theatrical plays. They grew up watching me stay up all night to meet the deadline ever since they were young. They know how hard it is to live as a cartoonist.

Your second daughter’s name is Eom-ji, the same as the fictional character from “A Daunting Team.”

She was born after the cartoon series, so I named her after the character.

You’ve been drawing many sports cartoons, from golf to baseball, but you made a football cartoon just once. Why is that?

The football cartoon “Roughly Unfortunate Fellows” came out in 1987 after “A Daunting Team” and “Ring of Hell” because the previous two were very dark. I felt like drawing something light and fun. That was the last football cartoon in my life because I had to draw a lot of football players when describing scenes. A large number of people go after a single ball, which is quite hard for a cartoonist to draw.

There is also a bigger reason. It was difficult for me to put drama into the soccer scenes. For me, baseball is a much better medium to write human stories because you have time before hitting the ball or pitching the ball. Although I found myself hating baseball at one point in my career because I had to draw the same gloves, balls and uniforms to finish 20 books for the same series. Personally, I prefer soccer to baseball.

You’ve been touching upon various sports, from boxing to volleyball to ice hockey to golf to ssireum (traditional Korean wrestling). What made you draw a lot of sports cartoons?

Back in the ’80s, publications and TV shows were censored by the government, but sports were quite free from censorship.

How do you expect the Korean national football team to perform at this year’s World Cup?

I bet they are guaranteed a spot in the Round of 16. Hong Myung-bo is an experienced athlete, but he is also a lucky guy. He looks confident.

What is your life philosophy?

My motto is a Chinese phrase that goes “genuine water has no taste and fragrance.” Thinking of the phrase, I try to be a person who is pure at heart.