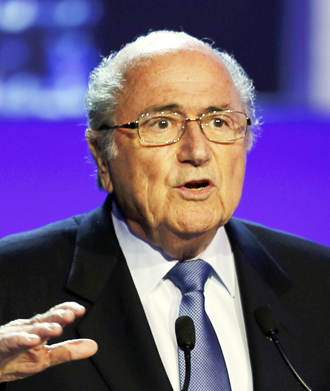 FIFA President Sepp Blatter used a speech to the annual Congress of world football’s ruling body on Wednesday to extol the sport’s ability to change lives, but he sidestepped specific references to the scandals surrounding the organization.

The 78-year-old Swiss has another opportunity later in the day to address allegations of bribery surrounding Qatar’s successful bid to host the 2022 World Cup that have marred the buildup to this year’s tournament in Brazil.

FIFA meetings in Sao Paulo this week, ahead of the World Cup opener between Brazil and Croatia on Thursday, have also underlined deep divisions within the body over whether Blatter should run for re-election in 2015.

His opening remarks to delegates from FIFA’s 209 member associations were general in nature and focused mainly on the benefits of FIFA and football more generally.

Blatter said FIFA had a responsibility to ensure the sport was a force for positive change, and asked what the organization should do to make that happen.

“The answer is easy and simple. ... We must lead by example and we must listen to all voices, we must be responsible and upright in all that we do, we must do the right thing even if that comes at a cost,” he said.

One specific area he did discuss was racism in football, a scourge of the modern game.

“We must stand strong against racism and discrimination. Suspensions and empty stadiums are not enough. Taking points, expelling teams or relegating them must be an example for all the others,” he said.

Blatter also alluded to the fact that Michael Garcia, who is heading an investigation into alleged corruption within FIFA, was in the audience and would address the Congress later on Wednesday.

It is not clear whether he had time to take into account recent reports in The Sunday Times based on “millions of documents,” some of which it linked payments by former FIFA executive committee member Mohamed Bin Hammam to officials as part of a campaign to win support for Qatar’s bid.

Hammam has not commented on his involvement since he was banned for life from football in 2012, while Qataris working on the project now say he was not a part of its official bid.

Garcia will submit the report to German judge Hans-Joachim Eckert, the head of the Ethics Committee’s adjudicatory chamber, in about six weeks, and if he finds corruption, Qatar could be stripped of the Cup, or at least face a challenge to its position as host either through a re-vote or other processes.

Delegates from Europe’s powerful governing body UEFA on Tuesday made it clear to Blatter that they would not support him running for re-election, believing that FIFA’s reputation has been tarnished by allegations of corruption and mismanagement.

But Blatter enjoys strong support from other regions, suggesting he is in a good position to extend his 16-year rule at the head of the world’s most popular sport until 2019 if he wants to.

Wednesday’s FIFA Congress is particularly important given the Qatar bid concerns, doubts over Blatter’s future and a lack of enthusiasm in host country Brazil for the World Cup.

Many Brazilians believe the money spent on building new stadiums in cities that only have small local teams should have gone instead to improving social services.

Support for hosting the World Cup has fallen from nearly 80 percent in 2008 to less than 50 percent this year, according to pollster Datafolha.

“These are important times for FIFA,” Blatter said.

“Football is not just a game, it is a multibillion-dollar business. I don’t know if that is good or not. It creates controversial situations and then some difficulties. In this changing world little is beyond the reach of politics and economics.”