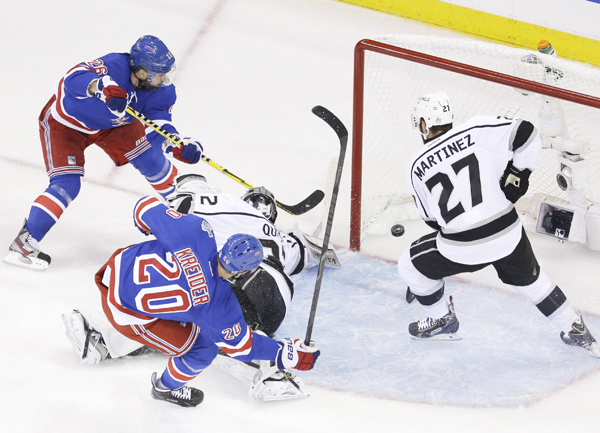 Henrik Lundqvist made 40 saves and had the Madison Square Garden crowd chanting his name in the New York Rangers’ 2-1 victory in Game 4 that kept the Los Angeles Kings from sweeping the Stanley Cup on Wednesday.

Benoit Pouliot and Martin St. Louis each scored for the Rangers, who kept the Kings at bay. Los Angeles leads the series 3-1 and will get its second shot to claim the Cup for the second time in three years Friday night at home.

Twice Los Angeles put the puck on the goal line, but couldn’t get it all the way across. The last came with 1:11 left in the game when Rangers forward Derek Stepan pushed the puck out of danger in the crease after it got behind Lundqvist.

Pouliot scored 7:25 into the first period and St. Louis added a goal in the second for the Rangers. New York squandered multiple two-goal advantages to lose the first two games in overtime in Los Angeles.

Lundqvist and the Rangers continued their mastery of extending their seasons. New York is 11-2 in the past 13 games when facing elimination, and Lundqvist was in goal for all of them.

The Rangers also have won an NHL-record eight consecutive home games when facing elimination, dating to 2008, behind Lundqvist.

The Kings pressed for the tying goal in the third period and outshot the Rangers 15-1 in the frame and 41-19 overall.

“I think we sat back a little too much in the third period. But we didn’t blow the lead this time,’’ Stepan said.

Two nights after Jonathan Quick stopped 32 shots in a 3-0 victory that put the Kings on the brink of another championship, Pouliot got a puck past him.

St. Louis put in a rebound at the left post 6:27 into the second, giving the Rangers their fifth two-goal lead of the series. But as in Games 1 and 2, a two-goal deficit sparked the Kings.

At the tail end of a Rangers power play, New York defenseman Dan Girardi broke his stick and lost the puck to Kings captain Dustin Brown for a breakaway the other way.

Brown made several moves in front of Lundqvist before tucking a forehand inside the right post to make it 2-1 with 11:13 left in the second.

The Kings had a chance to get even, but the Rangers killed Dominic Moore’s cross-checking penalty late in the period. Jeff Carter then got behind Girardi before being stopped on a breakaway by Lundqvist.

John Moore fired a drive from the center of the blue line that Pouliot deflected high with his stick blade into the top right corner behind Quick.