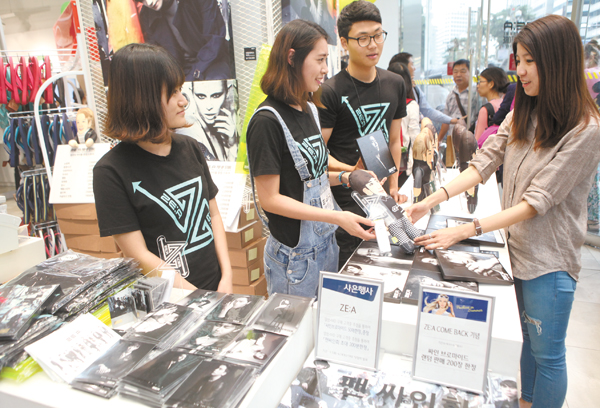 A consumer takes a look at a stuffed toy made into one of the members of boy band ZE:A yesterday at a pop-up store inside Lotte Department Store’s Young Plaza in Myeong-dong, central Seoul. Provided by the store

Kim Ji-eun, a 26-year-old graduate student, recently visited the Lotte Department Store in Myeongdong, central Seoul, to buy herself a birthday gift. She marched swiftly past the cosmetics and luxury handbags, heading straight to a boutique called SM Town on the ground floor of Young Plaza.

As a fan of EXO, a boy band managed by SM Entertainment, Kim purchased stationery, Post-its and bookmarks with images of the EXO members on them.

“Usually when I visit this store, I spend at least 50,000 won ($49.14),” Kim said. “And I’m not the only one. Many of my friends from school decorate their textbooks with EXO stickers and in the summer, many use fans with images of Girls’ Generation.”

For K-pop fans like Kim, Lotte Department Store has opened a new pop-up store that sells merchandise emblazoned with pictures of boy band ZE:A. This is in addition ? and in competition ? with the nine bands represented by different entertainment agencies featured at Young Plaza.

The experiment to collaborate with entertainment agencies began in January 2013, when Lotte opened a pop-up version of the SM Town store, that sold merchandise with images of stars managed by that agency.

It was a big hit. In just 12 days, Lotte raked in 630 million won in sales, which is a daily average of 50 million won. Five months later, Lotte Department Store officially opened the SM Town boutique inside Young Plaza and it has become one of its best-selling boutiques, with sales of 800 million won a month.

“A store that brings in between 100 million won and 200 million won is considered outstanding,” said Ahn Chi-woo, an official from Lotte Department Store. “Sales at SM Town are more than four times that of other shops.”

“We plan to hold special events for the ZE:A pop-up store,” said an official from Lotte. The store will remain open until Wednesday. “Members of ZE:A already visited the pop-up store on Tuesday and more than 300 fans crowded the place. There will be two more random visits by them.”

Although Korean shoppers are the mainstay, Chinese tourists are known to be big buyers of K-pop products as well.

“Of total sales, 40 percent are to Chinese and Japanese tourists,” said another official from Lotte Department Store. “They buy more than 100,000 won worth of items each, which is almost double the amount spent by Koreans.”

With the growing popularity of such entertainment-linked merchandise, online malls have also jumped on the bandwagon.

Interpark has partnered with JYP Entertainment and launched an online store (www.jypstore.interpark.com) earlier this year that sells K-pop group merchandise, including items relating to Wonder Girls, 2PM, 2AM and Miss A. There are limited editions of stickers, T-shirts, pens and folders.

“We opened this store based on our analysis that there is a steady number of fans of groups managed by JYP Entertainment,” said Ahn Jung-seon, an official from Interpark. “Before we launch some limited editions, we can feel a sense of tension among fans that want to get their hands on them first.”