On the first anniversary of taking office as chairman of Nonghyup Financial Group, Yim Jong-yong came up with a meaningful achievement: Making NH the country’s fourth-largest financial group with a successful M&A deal.

At a press conference held at group headquarters in central Seoul, Yim said that NH, which is owned by the National Agricultural Cooperative Federation, will become one of the top four with the acquisition of Woori Investment & Securities by the end of the year.

“We can call it an achievement, considering that the acquisition process was swiftly completed in just 10 months,” Yim said. “What made the process fast and successful was we had already formulated a management plan for the securities unit ahead of the acquisition by forming the post-merger integration team.”

NH was approved by the Financial Services Commission on June 3 to acquire Woori Investment & Securities, an arm of Woori Financial Group that is currently undergoing privatization. 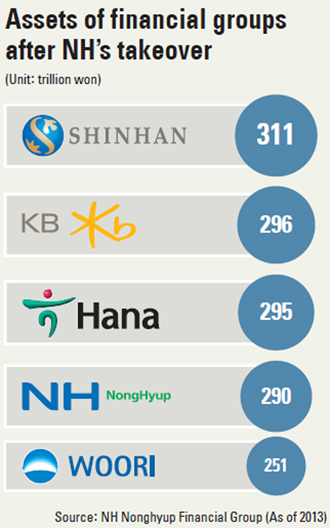 The group plans to merge its securities unit with the Woori unit and launch NH Wootoo Securities on Dec. 31.

The marriage between the two will create the country’s largest securities company. The total number of employees of the new company will be about 3,200, and it will have assets of about 4.3 trillion won ($4.22 billion).

About 420 employees of Woori’s securities arm and 190 from Nonghyup’s have applied for early retirement.

“An ultimate goal of the M&A is to combine the functions of the banking sector with the securities sector by maintaining the traditional investment banking function of Woori Investment & Securities and NH’s banking and bond function,” Yim said.

“One reason for the acquisition was to globalize NH,” Yim said. “By utilizing Woori Investment & Securities’ overseas networks, NH will expand into countries where agriculture is important in order to provide financial services for farmers.”

NH is preparing to advance into Southeast Asian countries such as Vietnam, Indonesia and Cambodia, Yim said. It is also looking at China and the Persian Gulf region.

Woori Investment & Securities holds a 60 percent stake in Indonesia’s Korindo Group, which is competitive in the agricultural sector.

“Although Woori’s overseas business has long been oriented toward finance only, we could work with Korindo in order to provide finance for the agricultural sector,” said Kim Won-kyu, CEO of Woori Investment & Securities. Kim was nominated CEO of the new combined securities unit.

With an enhanced securities unit, NH will have a more balanced business portfolio that is less dependent on the bank. Non-bank subsidiaries of the group will account for 33 percent of its total assets.

“There is much discussion about the roles of financial groups these days,” Yim said. “I think if the group system is needed, if the holding company can lead the group by providing clear visions and goals and not by intervening in minor issues at subsidiaries.”