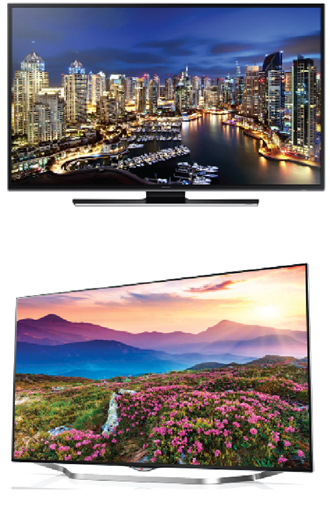 The FIFA World Cup, which began in Brazil earlier today Korea time, is giving a boost to TV manufacturers as they slowly emerge from the shadow of a years-long slump.

Many people are buying new TVs to enjoy better picture quality while watching the quadrennial football event. In particular, sales are picking up for ultra high-definition (UHD) TVs, once nearly off-limits to general consumers because of their high prices. The companies are helping the trend, churning out cheaper UHD products.

Samsung released UHD TVs earlier this month for 500,000 won to 1 million won ($491 to $982) more than light-emitting diode (LED) sets in response to a growing price competition with LG Electronics. A month earlier, LG Electronics rolled out a 49-inch UHD TV for 2.9 million won.

LG’s 55-inch UHD TV lineup is 110,000 won more expensive than Samsung’s. How different are the UHD products of Samsung and LG from each other?

UHD TVs deliver four times the picture resolution of full HD TVs, and televisions from the two companies offer almost equal picture resolution. Both have a 3-D view, but there is a slight difference in sound output. The sound output of the LG product is 20 watts, whereas Samsung’s is 60 watts. LG catches up with Samsung as the size gets bigger. LG’s 65-inch product has 70-watt sound, compared with 60 watts for Samsung’s 65-inch set.

One feature Samsung is promoting during the World Cup is “soccer mode,” which automatically records crucial moments in football games. The company also provides “multi-surround sound” and a screen that can be divided into nine frames, which is useful for catching a glimpse of each player.

LG has a distinctive feature called local dimming, which alters luminosity of some parts of the screen according to different scenes so that the whole picture looks more clear and vivid.

The specs and prices of the TVs may not be that different, but the companies are trying to further differentiate their products through marketing events.

LG Electronics says it will return 100,000 won in cash back to those buying 55-inch or larger TVs from the company if the Korean national team advances to the Round of 16.

Meanwhile, Samsung’s sales of UHD TVs in June as of yesterday were about twice as much as the same period in May, according to the company. LG Electronics said it sold four times more UHD TVs last month, compared with January. “We expect record-high sales of UHD TVs in June thanks to the World Cup,” said an official of LG Electronics. Lotte Hi-Mart, a retail distributor of electronic home appliances, said UHD TVs were at least 30 percent of all large TVS sold since February.

According to IHS yesterday, sales of flat TVs at both Samsung and LG saw double-digit year-on-year growth each month from January to March. The world’s two largest TV vendors sold 17 million flat TVs around the world in the first quarter, the market research agency said. Global shipments of flat TVs in the first quarter were 3.3 percent higher than the same quarter last year, it said.