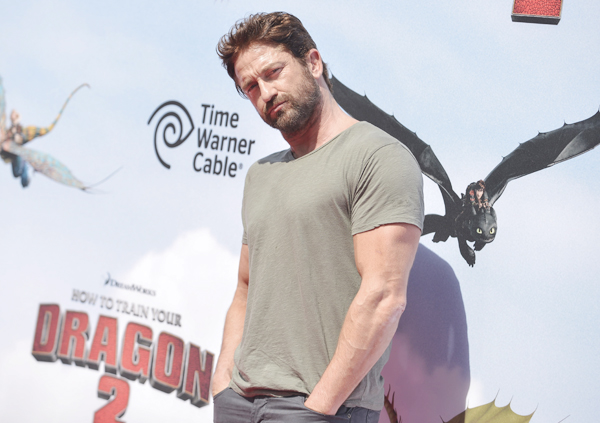 Ahead of the film’s release in U.S. theaters on Friday, the duo spoke to Reuters to discuss Scotland and dragons.

The animation is slated to open in Korea next month.

Q. Growing up in Scotland, did you ever think you’d be in a film riding dragons?

Ferguson: Yep. It was something that they taught us at school, that “one day, you two will be in a film riding dragons.”

Butler: “And if you’re not, you’ll be failures ... ” I think everybody has dreams of being in these fantasy worlds. But I think in Scotland especially - because of our history and the fact that our history is kind of “Braveheart,” and it is dragons and Vikings and that kind of thing - that maybe it’s even more important for us.

Craig, your character Gobber spills quite a big secret: He reveals that he is gay. How important was that revelation?

Ferguson: The reason it came about is because we were in the voice session. I was watching Gerry’s character fight with Cate Blanchett’s character, and the line I had in the script was - I say to Hiccup, “See, this is why I never married.”

Then I ad-libbed the line, “And one more reason,” and I said after that, “That’s right, Gobber’s coming out,” and Dean (DeBlois, the director) said, “Oh, that’s it, maybe he should,” and so it was Dean’s decision, not mine. I just threw the ad-lib in. But Gerry, when he saw the film, thought that it wasn’t that I was gay, that the reason I hadn’t got married is because I had lost my junk - it got cut off in a dragon fight. Which tells you more about his mind than it does about anything else going on.

What was your most challenging scene in the film?

Ferguson: For me the biggest challenge was dealing with the speech that comes after his [Butler’s] rather big moment. It was a very emotional speech that took a while to get through, because you know, you care about these people. I’ve been living with these characters for five or six years now, you care about them. You have an affection for them and as fanciful as that may sound, it’s real. So when something tragic happens to a character, it’s sore. It’s people you care about experiencing emotional pain, whether they’re fictional or not, and they’re not really fictional to me, they’re just different.

As both of you are part of Hollywood’s Scottish contingent, was it nice to do the parts with your native accent?

Ferguson: Gerry does accents all the time and plays Americans and plays different nationalities. I pretty much am myself.

Butler: It’s funny though, he’s actually better at accents than I am.

Ferguson: Yes, but only for comedy accents in sketches.

Butler: But it is always nice to get back into your own accent - not just your own accent, but an exaggerated form of your own accent, and use that muscularity and strength and power that you have as Scotsmen, but for us to play Vikings, and then you play with it and you can make it soft and whispery and then big and burly, and that’s really great fun - not just to have the accent but to be able to go crazy with it.

What are your thoughts on Scotland’s proposed independence from the United Kingdom ahead of September’s referendum?

Butler: That’s a tough one. We have our views, but you know - [looking at Ferguson] he’s just shutting off at this. We’ll be casting our vote.