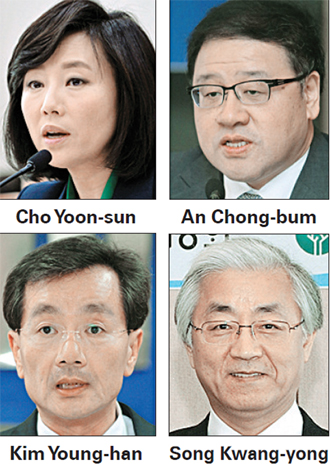 The Blue House yesterday named four new presidential senior secretaries in political affairs, economic affairs, civil affairs, and education and culture, as part of President Park Geun-hye’s reshuffle of the presidential office and cabinet in the wake of the Sewol ferry accident nearly two months ago.

The shake-up is designed so Park can “proceed with crucial state tasks such as remodeling of the nation and three-year economic innovation plans,” said presidential spokesman Min Kyung-wook in a briefing.

After the passenger ferry capsized off the southwestern coast on April 16, the president vowed to eradicate corrupt practices in the government to rebuild the Republic of Korea.

Cho Yoon-sun, 48, current minister of gender equality and family, was appointed senior secretary for political affairs, the first woman to assume the post.

An Chong-bum, 55, a lawmaker with the ruling Saenuri Party and former economics professor, was made senior secretary for economic affairs.

For senior secretary for civil affairs, the Blue House picked Kim Young-han, 57, a partner in Barun Law, a Seoul-based law firm, and a former senior prosecutor in the Narcotics and Organized Crime Investigation Department of the Supreme Prosecutors’ Office.

The appointments of senior presidential secretaries require no confirmations by the legislature.

After passing the bar exam in 1991 with a political science degree from Seoul National University, Seoul-born Cho worked as a lawyer at the nation’s No. 1 law firm, Kim & Chang, from 1992 until 2002 and briefly served as a joint spokeswoman for the Grand National Party (the predecessor of the Saenuri) presidential election preparation committee in 2002. She went back to Kim & Chang in 2003 until she joined Citibank Korea as vice president in 2007.

After serving once again as a spokeswoman for the Grand National Party, she became a proportional representative for the party in 2008 and was appointed minister of gender equality in March 2013 when the Park administration began.

The primary duty of the political affairs senior secretary is communicating and mediating between the president and lawmakers. But Park Joon-woo, her predecessor and incumbent senior secretary for political affairs, has disgruntled a number of lawmakers - from the opposition in particular - by deliberately keeping a distance from them, which critics say is President Park’s style. Park, a former career diplomat who is known to be trusted by the president, is likely to be dispatched to Japan as an ambassador, according to multiple sources.

Kim, the new senior secretary for civil affairs, was born in Euiseong, North Gyeongsang, and graduated from Yonsei University’s economics department. He worked as a prosecutor from 1988 to 2012, taking a variety of powerful posts such as senior prosecutor at the Narcotics and Organized Crime Investigation Department at the Supreme Prosecutors’ Office, before going into private practice.

Song, the senior secretary for education and culture appointee, was born in Boryeong, South Chungcheong, and earned a bachelor’s, a master’s and a doctorate degree of education from Seoul National University.

After assuming high-ranking posts at education-related groups and academies, he finished a four year-term as president of Seoul National University of Education in 2011.

“In a situation in which the role of education is critical, Song has exerted efforts to foster creative talent and upright character,” said spokesman Min. “He is expected to proactively support education reform and cultural prosperity policies.”

When Lee is counted, five out of nine senior secretaries have been swapped, marking the second major shuffle within the Blue House in the 16 months since the Park administration began.

The reshuffle at the Blue House has now wrapped up, according to the spokesman, and it has become official that the president’s Chief of Staff Kim Ki-choon will stay on despite demands from the main opposition New Politics Alliance for Democracy (NPAD) for his resignation.

The controversial 75-year-old figure was a close aide to Park’s father Park Chung Hee during the 1970s.

Today, the Blue House is set to unveil a list of up to eight ministers to be replaced, two days before Park embarks on a six-day trip to Central Asia. Sources say it is nearly certain Choi Kyung-hwan, a three-term Saenuri lawmaker and former minister of knowledge and economy, will assume the double post of deputy prime minister and minister of strategy and finance.