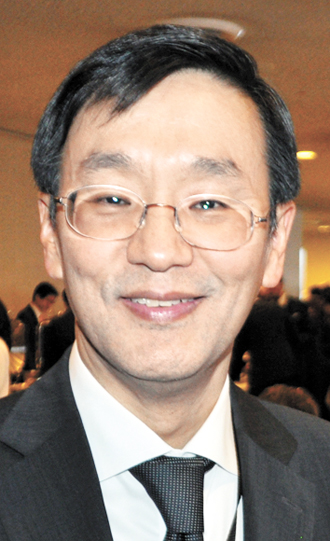 Paik Jin-hyun, 56, a Korean maritime law expert, was re-elected Wednesday to serve a nine-year tenure as a judge on the United Nation’s international sea tribunal.

Paik has served as a member of the International Tribunal for the Law of the Sea (ITLOS) since March 2009, when he was appointed in a by-election as its youngest judge at 51.

The United Nations Convention on the Law of the Sea held a vote to select seven new judges in a conference on Wednesday in New York. Paik was re-elected with the support of 130 out of the 159 member states that participated. Paik was up against 10 candidates running, including those from Japan and Iraq, who were competing for two openings for Asia.

This marks Korea’s 27 consecutive year as a member of the ITLOS, an independent judicial body established by the United Nations Convention on the Law of the Sea.

In 2009, Paik was voted onto the tribunal in a by-election with support from 113 of 155 member states to fill the vacancy created by the death of Park Choon-ho, who represented Korea as a judge on the tribunal since its inauguration in October 1996.

Park was re-elected in 2005 and served on the tribunal until November 2008, when he passed away in Seoul.

Paik will serve out the remainder of Park’s term until Sept. 30. His second term runs until 2023.

The sea tribunal, headquartered in Hamburg, Germany, is composed of 21 independent serving judges who must gain approval from more than two-thirds of the parties present at the conference to be elected.

According to the tribunal, its judges are selected from among high-profile individuals based on their fairness, integrity and competence in maritime law.

“In a reality where maritime disputes are getting more serious day by day in East Asia and across the world, the role of a maritime law judge will become even more important,” Paik said upon his re-election.

Territorial disputes in the Northeast Asian region have led to increasing tensions among neighboring countries. The South Korean Mission to the United States said in a statement that “stability in maritime order and steady development of the sea law sector is directly associated with [Korea’s] national interest,” as the nation is a growing maritime power.

Paik graduated from Seoul National University and Columbia Law School and went on to earn his doctorate degree in international law in 1989 at the University of Cambridge.

He has worked as a professor at the Institute of Foreign Affairs and National Security and at Seoul National University’s Graduate School of International Studies.