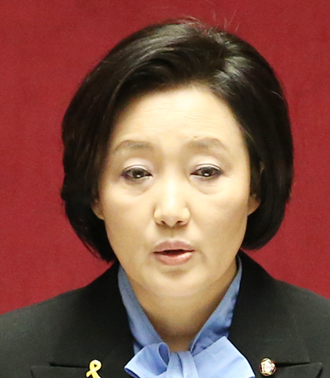 New Politics Alliance for Democracy floor leader Park Young-sun called for the creation of a trilateral consultative body yesterday in her parliamentary speech before lawmakers to address what she called the “five major social ills” that have bedeviled the country.

“To bring about a society that respects the lives of the people, we need to fix five social illnesses,” the 54-year-old opposition lawmaker said.

Park defined poverty among the elderly, housing and labor problems, youth unemployment and a low birthrate as the most pressing societal issues. It was her first speech delivered as the floor leader of the main opposition NPAD after she was elected to the party’s No. 2 position last month by her fellow lawmakers. Her speech yesterday came a day after her Saenuri counterpart Lee Wan-koo also made his address in the main chamber of the National Assembly.

Promising before her colleagues that NPAD would work hard to fix these social ills, Park proposed that the government and the ruling Saenuri Party launch a joint consultative body with her party to tackle those issues.

“Poverty among the elderly in Korea stands at 45 percent, the highest among members of the Organization for Economic Co-operation and Development (OECD),” Park noted.

Elderly poverty rates refer to those 65 and older living on less than half the median income of the general population. In Korea, the average annual income level last year was approximately $23,000 per capita, according to the International Monetary Fund.

Park also mentioned the country’s low birthrate, which shows that a woman gives birth to 1.18 babies on average, one of the lowest figures among OECD states.

“I promise you that NPAD will make the country take more responsibility to help parents raise their children by bolstering state support for day care centers,” she said.

Park also touched upon authorities’ seemingly unproductive efforts to arrest fugitive Yoo Byung-eun, the de-facto owner of Chonghaejin Marine Company that operated the doomed Sewol ferry, lashing out at the Blue House and prosecutors for what she called their incompetence. “How should the public interpret the situation in which authorities are failing to arrest a single fugitive? Doesn’t the current situation attest to the government’s irresponsibility and incompetence?” she said.

Despite Representative Park’s scathing criticism, lawmakers from the ruling Saenuri Party, who sat across opposition lawmakers, did not yell or ridicule her during her 20-minute address, in an apparent sign of respect.

It was in sharp contrast to the scene that unfolded two months ago when former Saenuri floor leader Choi Kyung-hwan shouted at NPAD Co-chairman Ahn Cheol-soo while he was delivering a parliamentary speech.