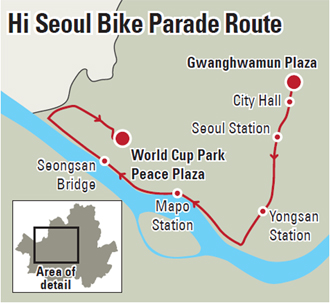 The Seoul Metropolitan Government is set to jointly host the 2014 Hi Seoul Bike Parade on Sunday with the support of the JoongAng Ilbo and JTBC.

The 5,000 participants in this year’s event will cycle from Gwanghwamun Plaza in central Seoul to the World Cup Park Peace Plaza next to the Seoul World Cup Stadium in Mapo District, northwestern Seoul.

Kim Sun-ki, 50, is attending this year’s parade with his wife Jo Mi-gyeong, 48, and two daughters Kim Min-jeong and Kim Hyeon-jeong.

This is the fifth consecutive year he and his family have participated in the parade.

“I always wondered how to spend time with my two daughters,” Kim said. “All four of us own bicycles, so I thought the bike parade would be a perfect event for our family.”

“When we ran through the 12-lane Taepyeongno Road without a single car to the Gangbyeon Expressway, I felt so refreshed and happy,” he added. “It is the only day we can ride along the road, which is usually packed with cars.”

According to its webpage, the event is held annually to raise awareness about energy consumption and responsibility. “We are holding this event to overcome the energy crisis; to further distribute new renewable energy; to turn energy-consuming Seoul into an energy producer; to promote bike usage, which doesn’t need energy and emits no carbon; and to save energy in our daily lives,” it says.

This is the sixth Hi Seoul Bike Parade since its establishment in 2009.

On Sunday, approximately 5,000 riders, divided into advanced, intermediate and novice groups, will depart from Gwanghwamun Plaza at 8 a.m. toward the Peace Plaza. Once arriving at the finish line, participants may enjoy promotional booths at the plaza as well as giveaway and celebratory performances, which include a show by a string trio and BMX bike tricks. Along the 21-kilometer (13-mile) course, cyclists will make their way through the capital city’s downtown area and traverse seven bridges along the Han River while appreciating Seoul’s scenery.

Attendees may easily return home via subway - the nearest subway stations around the Peace Plaza are Seoul World Cup Stadium Station and Mapo District Office Station on line No. 6.

For the bike parade and the Sejong-daero Pedestrian Street Event at Gwanghwamun Plaza, southbound traffic around the plaza will be restricted from 6 a.m. to 7 p.m. on Sunday, and northbound cars will be prohibited from driving along the plaza from 7 a.m. to 8 a.m. as parade preparation is under way, the Seoul Metropolitan Police Agency said yesterday.

It added that traffic along the cycling course will be restricted as well between 7:50 a.m. to 10 a.m. Police also called on drivers to avoid driving along the course to prevent congestion during the race.

For more information, call the Hi Seoul Bike Parade office at 02-2031-8466 or visit the webpage at www.hiseoulbike.com.