No immunity for a tear gas bomb

No immunity for a tear gas bomb 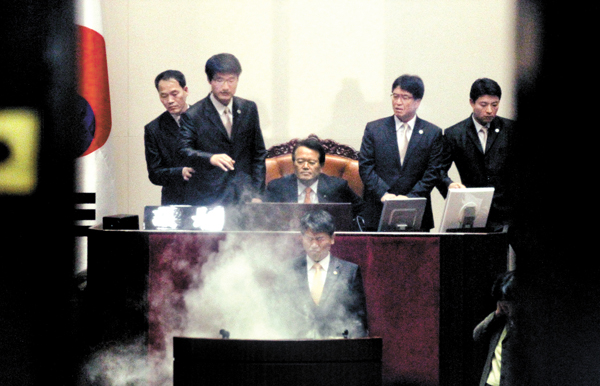 On March 19, 2012, in the run-up to the April 11 general elections, some 300 farmers assembled in an auditorium of a middle school in Suncheon, South Jeolla. While they gathered for a farming ceremony, an executive of a progressive organization in attendance shouted out, “Let’s make Kim Sun-dong a member of the National Assembly! Kim has thrown a tear gas canister to interfere with the passage of the Korea-U.S. Free Trade Agreement.”

I was there to cover the election management committee operations in South Jeolla, and I was utterly surprised by their passionate responses. One attendee even called him “general.” The illegal act of throwing a tear gas bomb in the National Assembly a year earlier had given him a nationwide reputation. Kim defeated a Democratic candidate in Suncheon-Gokseong District - a traditional stronghold of the former opposition Democratic Party - in the 2012 general election.

The voters may have given him “immunity,” but the judiciary made a contrary decision two years later. On Thursday, the Supreme Court upheld Kim’s one-year jail term and his two-year stay of execution for setting off a tear gas canister in the National Assembly’s main hall. The Supreme Court ruled the same as in the first and second trials. When the sentence was finalized, Kim lost his seat in the National Assembly.

The highest court found that a tear gas canister is a dangerous object. Throughout the trial, Kim argued that tear gas was not dangerous. But the canister carries the risk of explosion, and many casualties suffered discomfort from the gas. The judges found that, based on social common sense, tear gas and powders can pose enough of a threat to the parties involved or any third persons.

It doesn’t take a legal explanation to know that a tear gas bomb is dangerous. Kim’s argument was deluded. Moreover, the tear gas canister Kim threw was especially dangerous, as it not only posed a physical hazard but was an act of violence against democracy. It is a shame that a member of the National Assembly, who should be the protector of democracy and the law, employed such violent means to protest a government decision.

After the Supreme Court sentencing, Kim said that he had been “deprived of the National Assembly seat that the voters had elected him for.” It is even more absurd than calling a tear gas bomb harmless. Does being elected by constituents give him the right to break the law? He said he would fight for the people of Suncheon and Gokseong. It is his liberty to fight. But his fight had better be within the boundaries of the law. No longer a member of the National Assembly, Kim Seong-dong has no immunity.

*The author is a national news reporter for the JoongAng Ilbo.