‘Picasso of Korea’ dies at home at 95 years old

‘Picasso of Korea’ dies at home at 95 years old 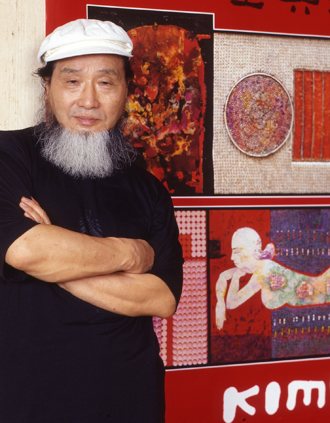 Kim Heung-sou, a painter dubbed the “Picasso of Korea,” died of natural causes Monday morning at his house in Pyeongchang-dong, northern Seoul.

Kim’s so-called harmonism paintings - a collaboration of structures and abstract forms - were acknowledged by local critics as a new facet of domestic art.

In an interview with the Segye Ilbo in 2009, the artist explained that the fundamental idea of harmonism was “combining elements of surrealism, impressionism and abstractionism.”

He also said that his artworks were creations of subjectivity and objectivity.

The artist came up with the new drawing technique in the late 1980s because he did not want to be an imitator but rather wished to develop his own individuality, according to the interview.

Kim, a displaced North Korean from Hamheung, northeast of Pyongyang, graduated from Tokyo University of the Arts in 1944 and taught art at Seoul Arts High School and Seoul National University.

He continued his studies in France for seven years, from 1955, and held individual art exhibitions at the Luxembourg Museum in Paris, Pushkin State Museum of Fine Arts in Moscow and the State Hermitage Museum in St. Petersburg, Russia. He became a member of the National Academy of Arts in 2010.

By the time he married Jang in 1992, Kim had been divorced twice.

Together, the couple opened the Kim Heungsou Museum in 2002, where Jang worked as executive curator. Kim became wheelchair-bound during the mid-2000s when his health deteriorated.

Last October, Kim launched an art exhibition in remembrance of his wife, who died of ovarian cancer in 2012.

“My wife used to hide her work from me,” Kim recalled. “Seeing her art pieces like this, I realize what a special person I’ve lost too early.”

Kim is survived by his three sons and a daughter.