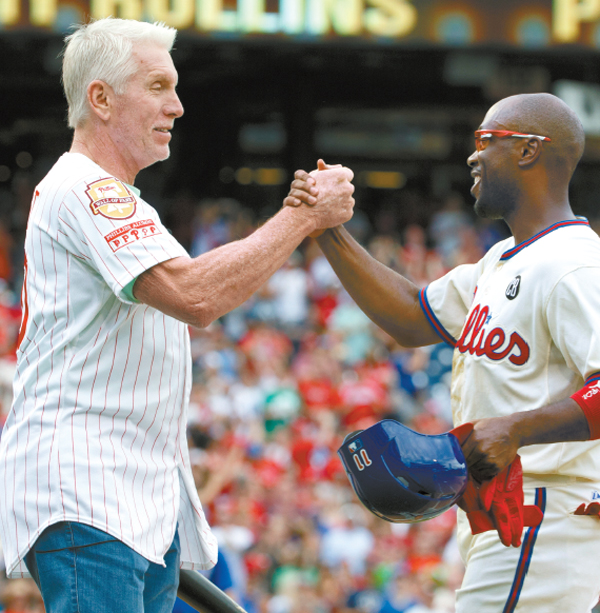 Jimmy Rollins, right, celebrates with the Phillies’ Hall of Fame third baseman Mike Schmidt during the fifth inning Saturday against the Chicago Cubs in Philadelphia. Rollins became the Phillies’ all-time hit leader, surpassing Schmidt, who held the title since 1989. [AP/NEWSIS]

Despite his diminutive size, Jimmy Rollins always believed he could hit a baseball.

Turns out he’s been good enough to amass more hits in a Phillies uniform than any other player.

Rollins singled in the fifth to pass Hall of Famer Mike Schmidt to become the Phillies’ hits leader and Domonic Brown capped the inning with a three-run homer, leading Philadelphia to a 7-4 win over the Chicago Cubs on Saturday.

Rollins got hit No. 2,235 off Edwin Jackson, sending a 3-1 pitch into right field to open the fifth. The game was then delayed for an on-field celebration.

“It was very cool,” said Rollins.

The 5-foot-8 shortstop never let his stature deter him.

“That’s something my mom and dad taught me when I was young,” he said. “[I’m] probably not going to be the biggest guy, but that doesn’t mean you have to be weak, doesn’t mean you don’t have confidence. And then size isn’t really going to matter. I’ve always had that belief in myself. Without it, I wouldn’t have been here.”

Chase Utley also homered for Philadelphia, which has won four of five following a dismal 1-8 stretch.

But the day belonged to Rollins.

He made his debut with the Phillies on Sept. 17, 2000, and has played his entire career in Philadelphia.

“To be the all-time hits leader, that speaks for itself,” said Philadelphia manager Ryne Sandberg. “It was well worth it. Fourteen years of effort with one uniform, in a lot of ways that’s old school.”

Said Cubs manager Rick Renteria: “He’s put together what is potentially a Hall of Fame career. He’s a credit to Philadelphia and the Phillies. I think he’s admired all over.”

Schmidt, a Phillies television analyst for Sunday games, retrieved Rollins’ bat and greeted the 2007 NL MVP with a high-five and hug at first base.

The entire Phillies team then came out from the dugout to offer congratulatory hugs and handshakes.

After the Phillies left the field, Schmidt took Rollins’ hand and held it in the air. Fans cheered and gave the duo a standing ovation as fireworks erupted from the large video board in left field.

“I told him, ‘Congrats, it couldn’t happen to a better guy,” Schmidt said later in the game. “I’m glad I was here. My heart is pounding.”

Schmidt had doubts that any player would break his hits record in notoriously tough Philadelphia and in the era of free agency. But Rollins’ mentality on and off the field, Schmidt says, allowed him to do it.

“He’s very comfortable in his own skin,” Schmidt said. “He’s got a nice, short stride and stays relaxed (at the plate). He’s a great clutch hitter, tremendous, much better than me. One of the great compliments you can pay a hitter is (to) say, ‘I want him up when the game is on the line.’”

Schmidt said Rollins should get ‘’definite consideration’’ for the Hall of Fame right now and believes Rollins could land in Cooperstown with continued solid play for three or four more years.