FOZ DO IGUACU, Brazil - No matter that the defense allowed five goals in the last two warm-up matches and the offense was nonexistent for the Korean national team, the time for the first Group H match against Russia has finally come and coach Hong Myung-bo has done everything he can to prepare the Taegeuk Warriors to win their first game of the 2014 Brazil World Cup that got into full swing over the weekend.

Before the team headed to Korea’s first battlefield in Cuiaba, where it will play Russia at 7 a.m. Wednesday Korea time, Hong ran a series of intensive training sessions to beef up the Taegeuk Warriors’ offense at Flamenco Stadium in Foz do Iguacu.

In the two-hour closed training, the team repeatedly worked on set-piece situations - free kicks and corner kicks -- and counterattacks with side attackers Son Heung-min and Lee Chung-yong trying to make accurate crosses to Park Chu-young and other center-line attackers.

Since the team arrived at its base camp in Iguacu, Hong has spent the most time on offense, reasoning that the goals allowed to Ghana in a 4-0 loss earlier in the month were caused by individual mistakes. “I think the defense didn’t have many problems systemically,” Hong said. “Some individual mistakes made early in the match made us allow goals too easily. The defenders know what went wrong at that moment, and they won’t make the same mistakes. It will get better in the group round matches because the level of concentration will certainly get a lot better for sure.” 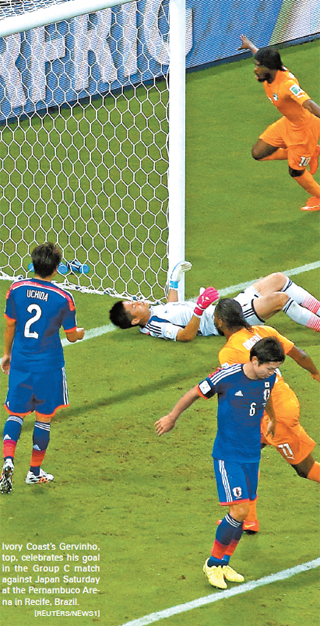 Ivory Coast’s Gervinho, top, celebrates his goal in the Group C match against Japan Saturday at the Pernambuco Arena in Recife, Brazil. [REUTERS/NEWS1]

“We actually didn’t have many chances to test our abilities in set-pieces in recent friendly matches we worked on in training, but since they are important chances to score, we have been working on it seriously,” said Hong Jung-ho, one of the four back defenders expected to start against Russia.

In the two-day closed training sessions, the national team focused on creating scoring chances and improving accuracy of shots in the penalty box.

Lee and Son worked on dribbling and making crosses on side areas in cooperation with wing-backs Yoon Suk-young and Lee Yong, and center midfielders Ki Sung-yueng and Koo Ja-cheol practiced distributing passes to attackers and overcoming defensive pressure, which in the past two friendly matches isolated striker Park and forced sideline attackers Son and Lee to rely on dribbling.

Hong also tested his jokers - 196-centimeter (6 feet, 6 inch) striker Kim Shin-wook and forward Lee Keun-ho, who will be utilized as substitutes late in the second half for an offensive boost against Russia’s defenders, who are mostly in their 30s and have shown stamina problems starting about the 70th minute. Hong wants to exploit that weakness.

“Many people talk about the team’s defense after the matches against Tunisia and Ghana, but it is obvious that we need to score goals in order to pick up three points,” said a member of the national team staff. “No matter how he [Hong] had been, his every focus has been on the Russia match for a long time and I think he has pretty much finished what he has to do.”

It looks like the Korean team may be ready for the World Cup, but the host country isn’t. The Korea Football Association said yesterday the team was suddenly assigned to use the Universidade Federal de Mato Grosso for training in Cuiaba instead of Barra do Pari. “The place initially assigned to the team is still under construction,” said a KFA spokesman.

More awkward is the fact that the Barra do Pari also was assigned to Russia, which decided to use another facility after it was informed of the situation.

After training at the new site, Korea will have its final session at the Arena Pantanal, where the game against Russia will be played Wednesday, Korea time.

Meanwhile, the heat and humidity of the jungle left their mark on the first World Cup match to be played in the Amazon rainforest, and so did Italy’s Mario Balotelli.

With players from both sides slowing as the game wore on, it was the man with the mohawk who headed in the deciding goal early in the second half to give Italy a 2-1 win over England and a decided advantage in Group D.

``We won, but now let’s keep our feet on the ground, otherwise we’re not going anywhere,’’ said Balotelli, an often volatile and brilliant striker who was nearly dropped from the starting lineup after struggling for AC Milan this season.

Balotelli was left unmarked at the far post in the 50th minute, giving him plenty of space to head a cross from Antonio Candreva past goalkeeper Joe Hart for the winning goal.

Marchisio gave the four-time champions the lead with a long shot through a crowded area and past a diving Hart in the 35th minute. Daniel Sturridge equalized for England two minutes later, tapping in a cross from Wayne Rooney.

In the other Group D match, Costa Rica beat Uruguay 3-1. So both England and Uruguay, who meet Thursday, have plenty of work to do.

In a Group C match between Ivory Coast and Japan, Didier Drogba came off the bench to inspire his home country to a 2-1 comeback victory over Japan.

Drogba, who had been carrying an injury, came on in the 62nd minute when his team was losing 1-0.

The talismanic striker’s arrival immediately lifted the Ivory Coast team and Wilfried Bony and Gervinho scored with headers two minutes apart. Both goals were set up by curling crosses from defender Serge Aurier.

Japan had the better of the play in the first half, taking a lead through Honda’s hard left-footed strike from about 12 yards in the 16th minute.

Yuto Nagatomo slid a pass across the edge of the penalty area to Honda, who settled the ball cleanly with his right foot before belting his 21st career international goal under the cross bar and inside the near post.