Library with no restrictions opens up in Paju

Library with no restrictions opens up in Paju 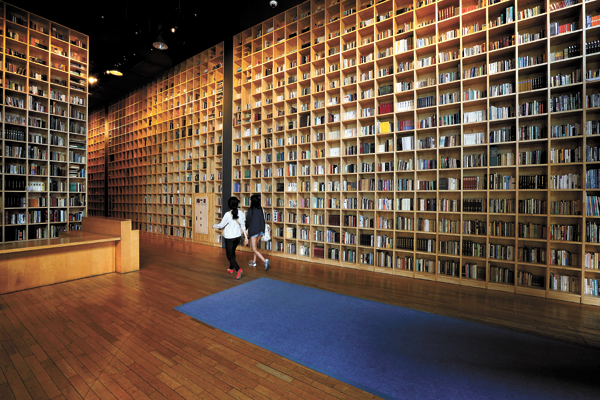 Inside “The Forest of Wisdom,” a new library opening Thursday in Paju Book City, Gyeonggi. By Choi Jeong-dong

A new type of library will open this Thursday where there are no guards at the door and where books don’t need to be checked out.

The experimental space, filled with 200,000 books, is called “The Forest of Wisdom” and is located at Paju Book City, Gyeonggi, on the northwestern outskirts of Seoul.

Anyone can wander in, pick up a book and read it at this 24-hour establishment.

“To prevent accumulated cultural heritage from being disposed of too easily, we decided to put [books] together in one space.”

The foundation received donations to fill its space. Out of the 500,000 books it received, 200,000 are on display on the shelves stretching 3.1 kilometers (1.9 miles) wide, and all types of genres are available.

The library may not be suitable for people who are looking for specific books, but visitors who are open to exploring various subjects could find some hidden gems.

The foundation has been training “book recommenders” to lead visitors to sections they may find useful or amusing.

Although Korean-language books dominate the space, there is also a multilingual section, which is filled with roughly 20,000 publications.

Because the purpose of having an open library is to encourage more people to read, the foundation is refraining from using too much time and energy keeping its book collection in house, although that doesn’t mean it is encouraging people to take the books outside of the building.

The library is situated in the lobby of the Asia Publication Culture and Information Center, which is connected to Guesthouse Jijihyang.

The guesthouse has books on every floor and in every room. Visitors can simply go down to the open library, take a book or two, read them in their room and return them when checking out.

The library’s organizer is also planning to invite writers for public seminars so that visitors can have the chance to meet local literary experts.

As it is the first time for any local group to try an open library, there will be many amendments made after the official opening. Kim says they expect to learn how to deal with the operation of the library more while on the job.

“We hope this experiment turns out to be a very successful one so that other cities in Korea will be inspired to create a similar library,” said Kim.

“Local governments can collect books from local literary experts and put books that would otherwise be discarded or thrown away into better use for people who may want to read them.”

To get to “The Forest of Wisdom,” take a bus from Hapjeong Station, line No. 2, to Paju Book City. The trip takes about 40 minutes.

For more information on how to get to the city and for extra details on the project, go to www.pajubookcity.org.