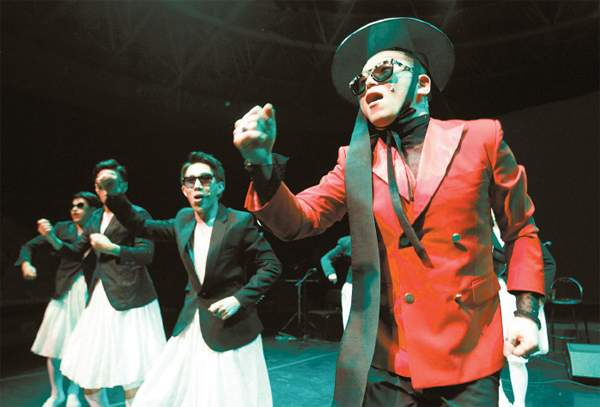 Korean classical musician Lee Hee-moon and his crew perform to a contemporary arrangement of a minyo, or a Korean folk song. Provided by the National Theater of Korea

Yeowoorak has been reworked to provide a wider spectrum of traditional Korean music, implementing jazz, hip-hop, rock and more.

With traditional Korean music as the festival’s fundamental motif, the monthlong fair has successfully experimented to make older national music more accessible to the general public since launching in 2010.

“While our festivals in the past stopped at just reinterpreting the existing repertory, this time the collaborations have stepped up to the next level, coming up with brand new repertoires and even aiming to achieve chemical reactions among the collaborating teams,” said Jang Jae-hyo, the festival’s music director, during a press conference Tuesday at the KB Haneul Youth Theater, the main venue of the event.

International Korean-Japanese pianist and composer Yang Bang-ean, who was behind the closing ceremony of the 2014 Sochi Olympics, will oversee Yeowoorak for the third time.

“I never realized that the genre had so many colors and possibilities before I came across a lot of professionals during the event.”

The festival is to have four themes, starting with the “Opening” section that will see Yang and 16 international artists perform, including some who performed at the event in the past.

Another noticeable act in the festival’s third act, “Sensation,” is world-acclaimed saxophonist Kang Tae-hwan, who will take to the stage with his own set of techniques, collaborating with jeongga [Korean court music] vocalist Kang Kwon-soon and geomungo [Korean zither] player Park Woo-jae.

The festival will finish with the grand finale - “Yeowoorak All-Stars” - where participants will put together new songs and join forces on each artist’s representative music pieces.

“We do collaborations simply because it’s pleasant,” said Yang. “It’s rare to have an opportunity where artists from different fields can meet naturally.

“We are preparing a stage where people can feel their hearts thumping just by imagining it.”

The festival will be held between July 4 and 26.