Purrfect production of “Cats” back

Purrfect production of “Cats” back 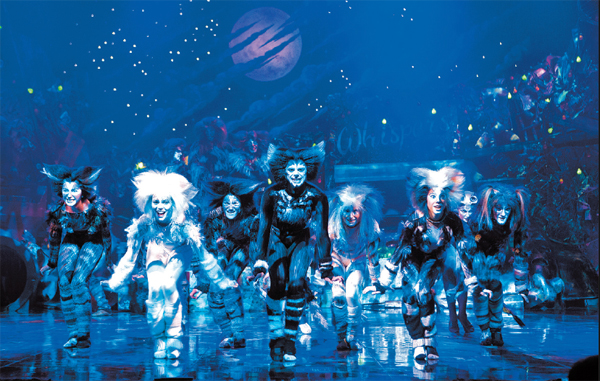 An international production of legendary Andrew Lloyd Webber’s hit musical “Cats” has come to Korea for the first time in six years. The felines will show off at the Blue Square in Hannam-dong, central Seoul, until mid August. Provided by the organizers

The international version of Andrew Lloyd Webber’s legendary musical “Cats” kicked off in Seoul last Friday, marking the first time in six years for a Korean audience to hear the show’s cast meow in English.

A Korean production of the musical, using the local language and homegrown actors, was performed in 2011 to celebrate its 30th anniversary. But it’s been a while since the Jellicle cats from abroad showed off their felinity.

Prior to launching “Cats” in Seoul, two actors who play the main roles of Rum Tum Tugger and Grizabella, as well as a choreographer, sat down with the Korea JoongAng Daily to talk about the show.

They warned Korean viewers to “watch out,” as they will not hesitate to carry out spontaneous mischief, like sitting on audience members’ laps or ransacking handbags.

“They should hold on to their belongings,” laughed Emma Delmenico, a resident choreographer of the production, who also replaces cast members if they are sick or injured.

“Jellicle Seats” are available for those who want to see the cats up close and are tolerant enough to laugh off their pranks.

The creatures prance through the auditorium, and while some cats steal things or cause mischief, others might organize the kittens and make sure everyone’s OK.

Earl Gregory, who plays Rum Tum Tugger, said such “improvised mischief,” especially at the beginning of the show, is “quite a pivotal moment” as it tells the audience they are intruders in the cats’ world.

“It’s like explaining to the audience what you are allowing yourself into and if you wanted to stay and watch what we are about to do, then you have to abide by our rules,” he said.

It’s important for the cast to be immersed in and to fully understand their own characters, but for “Cats” it’s especially significant.

Although he is allergic to the animals, Gregory has been praised highly for his turn as rebel cat Rum Tum Tugger.

The actor said he focuses on facial expressions because it’s important to show the audience what’s really going on and how the cat is feeling at that moment.

“We need to work our faces much more because when we are on stage it’s not going to read,” said Gregory. “You literally have to work the felinity.”

As it’s crucial to look like real cats on stage, the team has special ways to “transform” themselves by thinking like a cat.

“We have a process at the beginning of a rehearsal period where we get down on our hands and knees and spend an hour a day imagining how a cat moves,” said Delmenico. “We try to work with our paws, try to smell like a cat, scratch and clean like a cat. We have to figure that out for ourselves. You can’t copy someone. You have to work it out on your own body and find out what works for you.”

The cast also creates their own tails and even do their own makeup, which “helps [them] to investigate their own characters,” Delmenico said.

“We decorate our tails to resemble our character,” said Erin Cornell, who plays the glamorous cat Grizabella. “It helps us to be inspired.”

Cornell embellished Grizabella’s tail with “black and gold glitter, a few kinds of butterflies, black lace and a big bow, and lots of diamante and cat stickers - anything I could find.”

The actors said the process was especially fun as the director set a friendly competition to see who could come up with the best tail.

“All the cast members took it very seriously,” said Gregory, who decorated his tail with mice.

In fact, the tails have to be “earned” before the cast has the opportunity to decorate them.

“Not everyone gets their tail on the same day,” said Delmenico. “At the beginning of rehearsal period, everyone crawls around without tails, scratching, smelling and cleaning like a cat.”

“And maybe from one week later,” she continued, “the director awards those who really look like cats with a tail. You then take that tail that’s like a blank canvas, and it becomes yours for the rest of the tour.”

The actor is stuck with the tail for the whole tour, so it becomes a part of them, according to Delmenico. “You have to think of it like it’s your own, like an arm,” she said.

“It’s like one of your limbs,” said Gregory. “Sometimes things are so rushed that you forget your tail. It happened to me once when I forgot to take my tail to the rehearsal. It felt like there’s a part of me that’s missing. You feel almost like you are naked.”

The musical, based on “Old Possum’s Book of Practical Cats” by T.S. Eliot, first premiered on London’s West End in 1981 and on Broadway a year later with the same creative team. It’s one of the longest-running musicals, having been performed in 300 different cities and 15 different languages.

The cast for this production said the charm of the musical is that it has “no language barrier.”

“It’s such a physical show that the audience understands what’s happening on stage even though they don’t understand the language,” said Delmenico. “They don’t have to understand the words. They can just tell whether a cat is excited about a moment or upset or proud or any of those emotions because they are told physically.”

Tickets range from 50,000 won ($49) to 140,000 won. Jellicle Seats are priced at 140,000 won. There are also dinner deals that offer “Cats collabo” meals and tickets at three restaurants near the venue. Chai 797, a Chinese restaurant, has a multi-course meal with an R-seat ticket for 118,000 won while Elbon the Table is offering Italian food with an R-seat ticket at 138,500 won. For more information, visit www.musicalcats.co.kr. For tickets, visit ticket.interpark.com.