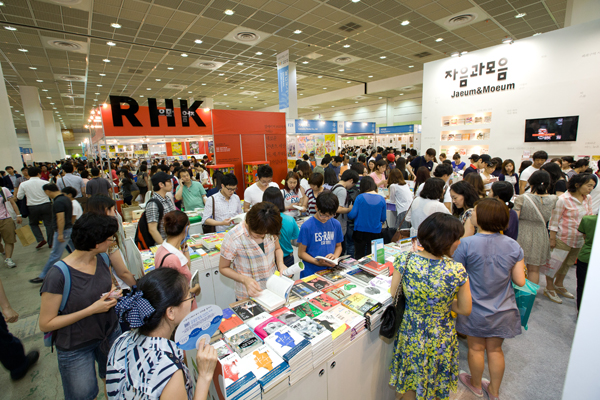 About a month after the London Book Fair highlighted the Korean literary scene, Korea is having its own international event so that local readers can learn more about global trends in the publishing market.

The Seoul International Book Fair is back in a slightly smaller space than last year but with more compact contents, said the Korean Publishers Association, which organized the event. The fair opens Wednesday for five days at Coex in Gangnam District, southern Seoul.

“Books are the source of our ideas,” said Koh Young-soo, president of the Korean Publishers Association, at a press conference for the event last week.

“And through this event, we hope publishers, writers and readers get to communicate more about their own ideas in a bid to encourage many others to read and have more attention on books.”

The 20th edition of the fair has chosen Oman as the guest of honor this year to celebrate 40 years of diplomatic ties between Korea and the Middle Eastern country.

“It is a great honor for us to introduce literary works to Korea,” said Mohamed Salim Alharthy, the Omani ambassador to Korea.

Visitors to the book event will get to learn about Omani history, culture, economics and tourism through books. Omani writer Jokha al-Harthi, of the novels “Dreams” and “Ladies of the Moon,” will hold a lecture on opening day.

Jokha was chosen as an aspiring writer by the International Prize for Arabic Fiction in 2011. Other local Omani experts will also take part in introductory seminars throughout the event.

In the international book fair, Seoul will celebrate another diplomatic anniversary with Italy, as this year marks the 130th anniversary of ties between the two nations.

“In an era when mass media relentlessly offers a huge amount of news and data, reading books becomes essential, as books give their readers an opportunity to concentrate and have an undisturbed and critical view of the text they convey,” said Angelo Gioe, director of the Italian Cultural Institute in Seoul.

Besides introducing foreign literature, the fair will also arrange meetings with Korean writers. A total of 22 novelists, poets and essayists, such as writer Jo Jeong-rae of “The Great Jungle” and novelist Eun Hee-kyung of “Poor Man’s Wife,” will talk about coming up with story ideas and their lives as writers.


The Seoul International Book Fair runs Wednesday until Sunday at A Hall in Coex, southern Seoul.