Top: Artists Shin Yoon-jae and Hong Seong-jae opened their space 000 gan in Changshin-dong, central Seoul, where hundreds of sewing factories are located. Above: The artists’ Zero Waste shirt, which is made with fabric remnants. By Park Sang-moon

A woman in her early 30s pulled a heavy trash bag full of cloth remnants up a steep hill in Changshin-dong, a small neighborhood just a few kilometers away from Dongdaemun District in central Seoul.

Hundreds of small sewing factories that rely on orders from Dongdaemun’s shopping centers are located in this hillside village. Usually, the only noise that fills the area is the loud purr of motorcycles, which are often heard above the hum of sewing machines. But that day, the woman’s exaggerated groans drew dozens of seamsters from the sewing factories to pop out and see “what in the world this young lady was doing with the leftover pieces of cloth they just chucked out,” recalls 30-year-old artist Shin Yoon-jae.

This is how Shin and her partner, Hong Seong-jae, 32, arrived at the neighborhood three years ago, on the day they opened their arts space 000 gan.

“As we were strangers to the neighborhood, we wondered what would be the best way to draw attention, and thought performance art would be the best,” says Shin. Thanks to such an “unfamiliar” performance, Shin says many of the residents were curious and approached them.

“Of course, they felt that two young artists opening up not a sewing factory but a space was unfamiliar,” says Shin. “But the art performance, I believe, naturally triggered a friendly conversation between the residents and us.”

The neighborhood is considered one of the most underdeveloped in Seoul, where more than 80 percent of the residents work in the sewing factories. Nearly 3,000 of these used to call the locale their home, but, according to the Jongno District Office, there were 980 in Changshin-dong and nearby Sungui-dong as of 2012.

“Many of the factories closed down because their businesses became bankrupt,” says an official from the district office. “They also close during the off seasons and open again during peak seasons.”

The atmosphere of Changshin-dong is dull. But things have begun to change since the arrival of Shin and Hong, artists who say they want to work with people outside of museums or galleries. The duo now has two spaces in the area, which open their doors for children to make artwork or for adults to have a glass of cold lemonade.

And that’s not all. On June 6, the artists held a launch party at the space for their second Zero Waste collection of shirts. Zero Waste is a philosophy that emphasizes reusing resources. The Zero Waste shirts made in Changshin-dong squander only 5 percent of the fabric used, unlike ordinary shirts that lose at least 20 percent to 30 percent.

“I think the quantity of remnants is especially high in Changshin-dong because here speed is more crucial than details,” says Shin. The factories receive orders from Dongdaemun, they buy materials from the fabric market next to it and then get them delivered as quickly as possible.

“It’s not designer goods they are making,” says Shin. “What they are making sell for few thousand won. To minimize remnants, they should mark the fabrics and cut them carefully, but that’s not considered important here.”

The shirts, say the artists, are not merely a solution to minimize industrial garbage.

“I heard of the watershed self-immolation of Jeon Tae-il in the 1970s,” says Shin. “The 22-year-old man burned himself to death in protest of poor working conditions in factories in this area. I thought that was a history that ended in the 70s. Of course, things have gotten better, but it isn’t over.”

That’s why the artists have a profit system that gives 50 percent of the Zero Waste shirts’ revenue to the seamsters.

“Such a profit system won’t leave us with much,” says Shin. “But it benefits the workers in many ways.” 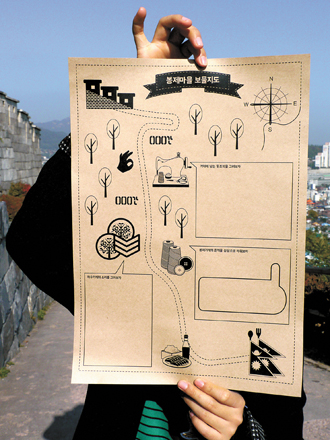 A map of Changshin-dong’s walking route;

The clothing, according to Shin and Hong, doesn’t just give workers a high return, it also supplies them with work during the factories’ off-season.

As Changshin-dong’s manufacturers rely heavily on work from Dongdaemun, they are busy during peak season, around summertime, having to work round the clock with no rest for nearly six months and with no work during the next six months.

“Having no work for six months doesn’t mean they can close the factories,” says Shin. “They open their factories and sit and wait for work, even though it’s small in quantity, because that’s their only source of income.”

“The biggest problem of living in such circumstances,” explains Shin, “is that workers who are parents of young children or teenagers can’t look after their children let alone pay attention to their education.”

“Even in the off-season, they wait all day just in case orders come in from Dongdaemun,” says Shin. “If they close the factory to either visit their children’s schools or to help them with homework, one order that might come in will go to their competitors.”

“Because the shirts are designed to minimize remnants, it’s relatively more complicated than the work they’ve been doing,” says Shin. “By taking time and making them during the off-season, they’ll realize that they too can make quality clothes. This will enhance their value, and I believe they can form partnerships with other designers as well.”

Although many famous designers already have their own sewing factories, Shin says she’s seen many new designers, who only make about 100 to 200 pieces, having difficulties finding a manufacturing company.

“With their enhanced skills, the workers will have the confidence to make clothes for designers as well,” says Shin. “In the long run, they’ll realize that they do not have to depend only on orders from Dongdaemun and will finally work with stability. Bringing about such a change is our ultimate goal.”

Shin and Hong started off by making 200 of the Zero Waste shirts with two factories but say they will produce T-shirts and plan to design padded jackets for winter using the same technique as well.

“[Just] us two can’t bring about a big change to a region,” says Hong. “I believe many designers and those in the fashion industry must sympathize with this vision and support and participate.”

“What we do,” Shin explains, “is closer to a movement. A movement that triggers change.”

“Through such projects, I believe workers will have the confidence and skills, while others outside will notice that Changshin-dong can also produce quality goods.

“Then, in the long run, such manufacturing industries in marginalized districts like Changshin will become higher value-added businesses and solve numerous problems that exist in this region,” says Shin.

From top to bottom: Children participate in a program to make Zero Waste shirts; Visitors on the Changshin-gil walking tour; and the new flowerpot signboard artists Shin Yoon-jae and Hong Seong-jae made for Isak Sewing Factory, located across from their arts space. By Park Sang-moon/Provided by 000 gan

After opening up the space in 2012, the couple has also been organizing free art programs for children, like making hair bands and brooches using fabric remnants. Together with residents and the children’s center in the neighborhood, they built a kids’ library and established Changshin-gil, a walking route for visitors.

Changshin-gil offers an audio guided tour with a map so that individuals can quietly take a walk in the neighborhood while listening to the stories about the lives of the residents.

Currently, visitors can visit 000 gan to borrow a map and an mp3 player for the tour. Shin and Hong are also creating a smartphone app for visitors to listen to the audio files, which will be available in September.

There’s not much to see in Changshin-gil. The landscape is not beautiful and there are no colorful murals.

As a form of public art, murals attract visitors but are not really welcomed by the residents, according to Hong and Shin.

“Usually, murals are painted on the walls of residents’ houses in a neighborhood that’s considered poor and underdeveloped,” says Hong. “Not everybody enjoys being looked upon.”

Shin and Hong wanted visitors to engage in an ethical walking tour that does not invade residents’ privacy.

Instead of covering the dirty walls with paintings, Hong and Shin gathered the residents and held a festival to paint the walls white and share food and drink.

“We talked to the residents and came to the conclusion that painting the walls white was what everyone wanted,” says Shin. “We had so much fun, and the children enjoyed it a lot. Now, when the walls become dirty, it’s the children who knock on our door and says it’s time to hold the festival again.”

During the summer, Shin and Hong says they’ll be making artistic signboards with children.

“Even though there are nearly 1,000 sewing factories in this area, most of them don’t have signboards,” says Shin.

Because the factories only work with merchants from Dongdaemun, they do not feel the need to spend money on putting up signs.

As a sample, Shin and Hong made a flowerpot sign that says the sewing company specializes in skirts by using recycled materials. The seamster at Isak Sewing Company, which is located right across from 000 gan, says he is very pleased with the signboard.

“We are planning to make 50 to 60 signboards this summer with the children,” says Hong.

Assembling wooden benches is another project slated for this summer. As Changshin-dong is on a hill, Hong and Shin say resting areas are indispensable, especially for the elderly.

“In Changshin, there are the elderly, workers, teenagers and children,” says Shin.

“Our ultimate goal is to help them become more independent, but at the same time, share experiences and cooperate. That way, we believe the many problems this town has will be solved.”

Taking that as a model, Shin and Hong says they hope other young social entrepreneurs will expand across the country and make small but effective changes.