Last year, 26-year-old law school student Kang Jeong-woo decided to buy an electric bicycle for 1.15 million won ($1,130) to help him get around campus in a timely fashion while remaining sweat-free.

It usually takes him about 15 minutes to reach his classes on foot because the school campus has many hills, so he purchased an Estar S bicycle from Alton Sports to ease his commute.

“In the summer, I get exhausted every morning from crawling up those hills,” Kang said. “That’s why I bought one.

“It’s cheaper than foreign brands and the power in climbing the hill is satisfactory,” he said. “The only problem is that since not many people have an electric bicycle here, I’m worried about maintenance for it or what to do if the battery dies.”

But the number of people opting for an electric bicycle, which runs on a rechargeable motor instead of pedal power, has been rising. An electric bike means far less work for the biker. The motor turns on as soon as the sensors on the pedals detect the rider. By pressing a button, the biker doesn’t have to pedal uphill or for long distances as the wheels rotate automatically.

If the battery runs out, bikers can stay mobile by pedaling normally, which also recharges the battery. The average lifespan of the battery is five years when it is plugged in to fully charge three times a week.

The Ministry of Security and Public Administration estimates the number of electric bicycles used in Korea has risen from 5,000 units in 2012 to 20,000 today.

Globally, electric bikes have become hugely popular for their convenience and economic benefits. According to the Electric Bikes Worldwide Reports, the electric bicycle market in 2010 was 30.5 million units. Last year, it grew 20 percent to 34.4 million and this year the market is projected to reach 37 million.

The current electric bicycle market in Korea is dominated by local brands. Footloose, the world’s first chainless electric bicycle, was developed by auto parts manufacturer Mando in 2012. Its design is slick, and since it has a motor and no chain, it is safer than other electric bikes.

“There was a time when I almost lost my life when my bicycle chain got tangled with a pet leash,” said Lim Chang-gyu, who bought a Footloose last year. “But since I switched to Footloose I no longer fear my bicycle chain will get tangled, which is a huge relief.” 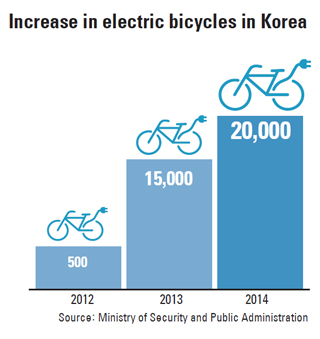 The major burden of an electric bicycle is the price, which is normally well above 4 million won. Mando plans to release a cheaper model in August that will cost between 2 million won and 3 million won.

Other local bike companies are also getting in on the hype. Last year Samchuly, the largest manufacturer and retailer of bicycles in Korea, released its own electric bicycle called Phantom.

The company expects sales of the bike this year will be up more than 50 percent over last year.

As electric bicycles gain attention in Korea, overseas makers are joining the competition. British electric bicycle manufacturer A2B entered the local market in April with its Shima bike. The bicycle has a maximum speed of 45 kilometers per hour (27 miles per hour), which makes it the equivalent of a sports car in the electric bike industry.

Industry sources say that Mercedes-Benz is considering launching its e-bike in Korea later this year.

Demand is expected to grow as the price of electric bicycles has been falling from their previous retail price of about 4 million won to between 1 million won and 2 million won to stay within the budget of potential customers.

One of the biggest appeals of an electric bicycle, especially to younger consumers, is that it’s cheaper than public transportation and allows the commuter to travel for long distances without much effort compared with conventional bicycles. The battery capacity of locally sold electric bikes is usually about 8 ampere-hour.

On a fully charged battery with 8 ampere-hour, a rider can travel an average of 35 kilometers without pedaling. Assuming the biker is an adult male weighing 70 kilograms (154 pounds), he could commute to and from work as far as Yeouido, southwestern Seoul, from Jamsil, southeastern Seoul, on an electric bicycle, and it would take less than an hour one way.

The bike is cost effective because the bill on a single full battery charge is 50 won to 100 won.

That means it would only cost the owner 1,000 won to 2,000 won a month to commute daily from Jamsil to Yeouido. That’s far cheaper than traveling on subways and buses, where the minimum expense for a round trip would be 2,100 won.

When traveling the same distance in a car with fuel efficiency of 10 kilometer per liter, the monthly expense would come to about 130,000 won at a fuel cost of 1,865 won per liter.

The biggest obstacle keeping the electric bike market from exploding is bureaucratic regulations. There are no specific traffic laws for electric bicycles. Under current legislation, electric bicycles are labeled as a vehicle so the rider must have a driver’s license permitting them to drive a motorcycle.

This also means that electric bikes can’t travel in bicycle lanes, which exposes the driver to the higher risk of driving in car lanes.

This is in stark contrast to other countries such as China, where 35 percent of its bicycles are powered by electricity, the Netherlands with 17 percent and Japan with 8 percent. In those countries, people commute to work on their electric bicycles as an alternative to cars because there are no license requirements and no ban on riding in bicycle lanes.

The industry has been trying to push for changes in the regulations. Kang Chang-il, a lawmaker with the New Politics Alliance for Democracy, in November 2012 submitted a revision of the road traffic law that would clarify the definition of an electric bicycle and ease related regulations. However, in February of last year, the proposal failed to pass through the Security and Public Administration Committee and has failed to make progress since then.

The argument made by those who are opposed to an electric vehicle being treated as a bicycle is that it can literally become as powerful as a motorcycle if the motor is tampered with so that it can run at a faster speed.

“It has become a global trend where environmentally friendly transportation, such as car sharing and electric bicycles in big cities, are being welcomed,” said Kim Pil-soo, an automotive engineering professor at Daelim University. “We have to positively benchmark examples of advanced economies and promote the use of electric bicycles.”