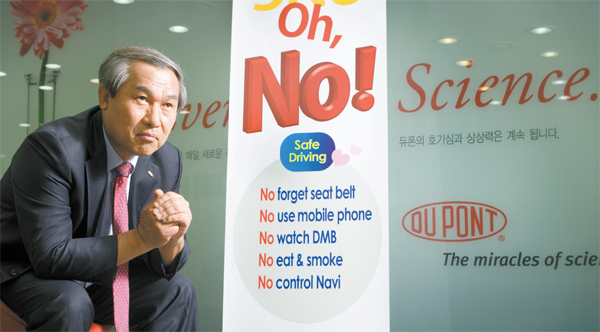 Rim Jeong-taik, president of DuPont Korea, poses in front of a safety sign at the company’s headquarters in Yeoksam-dong, southern Seoul.By Park Sang-moon

For Rim Jeong-taik, president of DuPont Korea, the Sewol ferry tragedy is an accident that should never have happened.

“The level of DuPont’s safety rules are, for sure, higher than Korea’s and many other countries’,” Rim said in an interview with the Korea JoongAng Daily at the company’s building in Yeoksam-dong, southern Seoul, late last month. “What we are doing is making employees feel safer at work than they are at home.”

During the interview, the chief of the DuPont Korea subsidiary, who has broad expertise ranging from logistics to finance and mergers and acquisitions, spent nearly an hour on how strong safely rules are at DuPont.

Rim, who spent 25 years at the U.S.-based DuPont, emphasized that DuPont is no longer a mere chemical company.

“I say we are all about science,” Rim said with a laugh. “For the first 100 years, DuPont was a gunpowder maker. Then it became a chemical company for another 100 years. Now we want to be an integrated science company.”

DuPont is an extraordinary multinational business that has been brought about many changes over the last 212 years, Rim said.

“From now on, DuPont will keep looking for new businesses that will make contributions for all mankind,” he said. “At global companies like DuPont, employees do not work just for profits. They produce products in order to keep their families safe, improve health and protect the environment. They know what they are doing.”

DuPont’s capabilities to set clear goals, make decisions and execute them accurately are something Korean companies could learn from, Rim said.


Q. DuPont is widely known for its strong safety culture. As you know, lack of a safety culture is a big issue here. Can you describe how DuPont pursues safety?

A. We have four core values: safety, the environment, respect and ethics. Safety is not only for our employees but for all of mankind. The reason why I could work at DuPont for the past 25 years was that the company keeps its values very strictly. As you can see, at every corner in our office building, there are convex lenses up on the walls to prevent employees from bumping into each other when they go around the corners. And on the corner of every floor there are a fire extinguisher and a torch. In any emergency situation, employees can pick up the needed items quickly. All chairs that we use have five legs so we don’t fall backwards.

Left: An exhibition explains the functions of the DuPont Korea Innovation Center in Bundang, Gyeonggi, which opened three years ago. Middle: Rim and his employees pose after participating in the Habitat for Humanity program in October 2012. Right: DuPont employees smile while harvesting grapes as a form of community service in Sangchon Village in Namyangju, Gyeonggi, in September 2012. Provided by the company

We have internal safety rules that should be strictly complied with, otherwise the company can fire violators. Every minor accident is reported to the company and recorded. Then, a list of accidents is shared globally in the form of a monthly safety book.

The last accident reported at our plant in Ulsan was an employee who strained his back by carrying a heavy plate two years ago. Recently, we started to ask employees report to the company if they do any wild activities on weekends in order to be aware of possible risks. We believe such near-miss accidents can be preventable, if we think of safety every day and all the time. It is possible through training.

We educate and train entry-level workers for at least six months in their first year. At every meeting, one participant gets to share their personal experiences about safety or ethics for about five minutes. We call this “core value tips.” When we have outside guests at meetings, we also have to start by telling them where emergency exits are and how to get to them.

The Sewol ferry disaster shouldn’t have happened, and such an accident would not happen again if we follow these kind of very simple rules strictly. DuPont’s safety rules are tougher than those of any other company or country, I believe.


How does DuPont view the Korean market?

DuPont still regards the Korean market as very important because industries grow here. We consider the automobile, display, semiconductor and construction industries as very significant. DuPont Korea is the 11th largest subsidiary in terms of sales among 90 countries. Last year we had sales of 700 billion won ($688 million). I hope to reach 1 trillion won soon. So, the Korean market is quite significant for DuPont.

We are now seriously considering what will be new future engines for the market. At the same time, we find it pretty tough to get along with local companies because their manufacturing processes are incredibly fast. They also make bold, large investment that DuPont wouldn’t be able to do. It’s because the industries are changing fast, not only the IT industry but also the auto industry.

With our local customers like Samsung Electronics and Hyundai Motor, we want to do lots of work together but sometimes their cycles and ours don’t really match. Fast processes and bold investment execution are what we want to learn from local companies. Another reason is that Korean companies that have been used to rapid growth on their own are not that used to a cooperative working environment that needs to recognize and accept the other company’s values.

What kinds of companies can be called DuPont’s rivals? Kolon Industries in Korea?

Many think of Kolon as a DuPont rival because of the Kevlar issue, but that is an isolated case. The lawsuit between DuPont and Kolon is widely known as an intellectual property issue, but actually it is not. We maintain that Kolon stole our [Kevlar] technology. The latest appeal court decision [in which Kolon won] didn’t reverse the previous verdict. It still says it was technology theft. Korean companies have a tendency of taking the IP issue less than seriously because, as late-comers, they need to learn from advanced businesses. DuPont considers the manufacturing process most important. Not the discovery of a good material, but the process that turned the material into a product matters to DuPont.

Many foreign companies don’t want to get patents for these valuable processes, because that protects it only for 20 years and then it has to be disclosed because the patent expires. DuPont made the aramid material that was at the center of the Kolon issue 40 years ago. [The patent expired in 1990.] As a Korean, I don’t want to see such conflict between local companies and DuPont. Of course, I don’t get involved in this issue. It’s a matter between our headquarters and Kolon. DuPont is a conservative company and is feels strongly about such issues. If any business wants our technology, they can request cooperation and we can provide our technology for proper compensation.

It’s where ethics come in. And there is no one particular archrival that we can mention since we have so many different products in different businesses. As a material company, we develop very segmentized products in terms of functions, so we don’t compete with exactly the same products by other companies. Of course, there are companies that produce similar products like Basf, Bayer and Dow Chemical, but each company has been delving deeper into specific areas of their own. We have become quite distant from each other in terms of business portfolios.

What do you think a creative economy is?

I am not sure if the government has a clear definition of innovation. At DuPont we have a position called chief of innovation office. In our definition, innovation doesn’t mean making up a new thing. Creating a value that will influence the market, that is an point of innovation.

The government tends to subsidize innovative businesses, but that should not be the end. Even if an academy discovered a new material, that’s not innovation if it doesn’t have any impact on the market.

Normally, many stop at the first few stages of innovation and hardly reach the end. But they talk of innovation all the time. They believe they are doing innovation. If the government provides subsidies for R&D at companies, it should be mindful of returns. DuPont spends annually about $2.1 billion on R&D. We always expect returns from the spending. If we start 100 new projects, at the end, we end up with less than 10 successful ones that reach the market. That’s how hard innovation is.

To improve our innovation process, we opened an Innovation Center here three years ago, where our clients can visit and discuss ideas. After three years, we see some visible results. And many revisit the center, which means there is real need for such a place where people can communicate about new ideas.