Moon ‘sorry’ for his past remarks

Moon ‘sorry’ for his past remarks 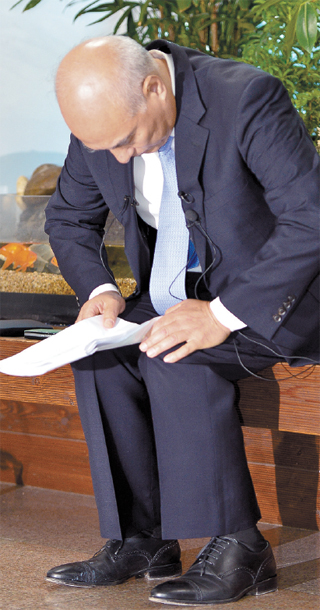 During a press briefing yesterday in Jongno District, central Seoul, prime minister nominee Moon Chang-keuk bows in an expression of apology to people who may have been hurt by remarks he made as a journalist. [NEWS1]

Facing mounting criticism over a number of remarks he made during his years as a journalist, Prime Minister-designate Moon Chang-keuk apologized to the public yesterday in a hastily arranged press briefing.

“I know there are people hurt [by my remarks], though it was not intentional. I express my sincere apology to them,” said a somber-looking Moon during a press briefing at the government complex’s annex building in Changseong-dong, Jongno District, central Seoul, which was held amid rising questions over the prospective prime minister’s historical views.

Moon, former editor-in-chief of the JoongAng Ilbo, has been embroiled in simmering controversy over a speech he delivered at a mega church in Seoul in 2011, in which he said that the Japanese colonization of the Korean Peninsula from 1910 to 1945, and its subsequent division after the 1950-53 Korean War, were part of God’s plan for the Korean people.

During the briefing yesterday, Moon said he made the controversial remark because the address was for Christians, people who believe every part of their lives is related to God’s will.

“The speech was for followers of my church. And they believe all parts of our lives are in God’s plan. So I said [in the address] God allowed us to try ourselves because he loves us to become a stronger people,” the former journalist said.

Moon added that he was attempting to convey a message to his church members that the country’s current success is because God paved a way for it following hardship.

“It was not a general historical view but a religious view in history shared by people with the same [Christian] belief.”

Regarding the remark Moon made about Koreans during the Joseon Dynasty (1392-1910) being lazy, the former journalist of 38 years said the message’s intention had been misinterpreted. Moon said he was pointing to the pervasive culture of corruption among the top echelon of Joseon society during its final years, which eventually led to the Japanese annexation of Korea.

“We are now the world’s 10th-largest economic powerhouse. Everyone knows that Korean people are very diligent,” Moon explained.

On another controversial remark Moon allegedly made in a lecture before university students - that Korea should not demand compensation for the mobilization of young women as sexual slaves for Japanese soldiers during World War II - Moon said, “My historical view on Japan does not differ from the public, including the comfort women issue. I have insisted that Japan must apologize first [before talks on financial compensation].”

While noting that he is the father of three daughters, Moon said he is still “enraged” about the pain inflicted on young women by the Japanese during its colonial rule.

“The remarks that have caused concern now were all made when I was in journalism. I strongly believe that I will have to behave and take responsibility befitting with public office. I sincerely hope the public sees my true intention,” Moon said.

The major opposition New Politics Alliance for Democracy continued its stinging criticism of Moon yesterday, demanding he give up his nomination.

On Moon’s apology yesterday, Park Beom-kye, spokesman of the NPAD, said, “It is only a one-time excuse made just to pass a confirmation hearing. [The apology] will not change who he is.”

“The troublesome remarks reflect his true historical views deeply embedded in his mind,” he added.

Meanwhile, the Blue House is expected to send a motion today requesting the National Assembly to hold confirmation hearings for Moon. The NPAD is poised to launch an offensive against Moon in an aim to force him to withdraw from candidacy. The ruling Saenuri Party has insisted that Moon should be given a chance to explain his controversial remarks and clarify his stance during the hearings.

To become prime minister, Moon needs to receive consent from at least 143 lawmakers, or half of the assembly. The ruling Saenuri commands the loyalty of 148 lawmakers while the NPAD has 126.