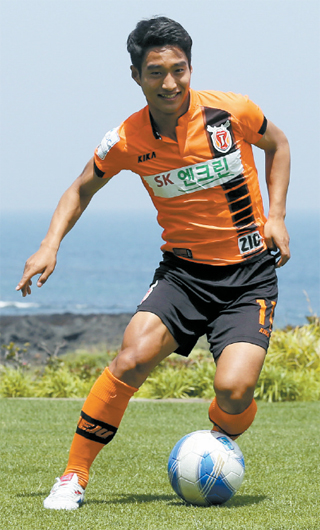 Kim Chang-jun, an 18-year-old North Korean defector, currently plays in a youth football club called Jeju United U18 and aspires to become a member of the national football team. By Kim Seong-ryong

*Although the number of North Korean defectors in the South surpassed 26,000 this year, most struggle to adjust and very few have made notable successes of themselves. There are so many media reports on their failures and problems that officials worry defectors will be stigmatized as incompetent parasites who can never succeed in their adopted country. The Korea JoongAng Daily is putting a spotlight on the “hidden defectors” who succeed in the capitalist South on their own through personal ambitions and efforts - without the need for government subsidies - to show the silver lining to defectors who are still lost in the dark cloud of adjustment.

JEJU - It’s a tragic irony that after fleeing the world’s most oppressive regime, North Korean defectors face a whole different set of hardships in settling into modern, prosperous and democratic South Korea. Some end up in menial jobs. A few fail so miserably to adapt that they actually return to the North.

And then there are defectors like Kim Chang-jun, who proactively pursued his dream despite challenges and unfavorable conditions.

The 18-year-old, who escaped North Korea in October 2005 with his mother, aspires to become a member of the national football team. To that end, he devotes most of his time to training as a defender for a youth football club called Jeju United U18, which is based on Jeju Island.

Kim’s football dreams began shortly after he arrived in Seoul in April 2006, after he and his mother traveled through China and Cambodia.

Kim’s two sisters had already defected to South Korea. His father insisted on staying in the North; Kim presumes that he still lives in Haeryung, North Hamgyong Province.

Kim’s family settled in Mapo District, western Seoul, and happened to attend a church service in the district one Sunday. It was to become a life-changing day. The deacon of the church was the one who first encouraged Kim to take football more seriously.

“I would play soccer whenever and wherever possible since my childhood,” says the teen defector.

“So, at the time, I was playing soccer in the churchyard. And the deacon approached me and told me that it would be good if I played soccer not just as a hobby but in a more serious way.”

The deacon recommended he apply to Kuryong Elementary School and introduced him to a football coach at the school. Kuryong in Gangnam District is known for its strong football club.

“I liked playing soccer, but I hadn’t learned any true techniques,” Kim says. “So it was obvious that I fell behind other skilled team members.”

His relatively small frame - he is only 167 centimeters (5.48 feet) tall - also worked against him.

He was fortunate to get one-on-one training with the coach on both weekdays and weekends.

“I also woke up at dawn on weekends to practice and do a workout. I was able to endure the tough schedule because at least I could pursue my dream. That’s something that I dare not have dreamed about in North Korea.”

Kim started at Kuryong in the fifth grade. “By the end of the sixth grade,” he says, “I felt that my skills had reached the level of my teammates.”

After graduating from Kuryong, he was admitted to Dongbuk Middle School, which also has a good reputation for its football team.

At the end of his middle-school years, he was recruited by Jeju United U18, a provincial football club for boys under 18 on Jeju Island, which was also rather intense. It required him to move to Jeju in 2011 and live away from his family.

“I usually have two training sessions, one in the morning and the other in the afternoon,” he says. “When the weather is hot like today, training becomes really hard.”

On the day the Korea JoongAng Daily interviewed Kim, as the temperature surpassed 30 degrees Celsius (86 Fahrenheit), the team was planning to run on the beach carrying weights.

Kim’s short-term goal is to do well in upcoming matches with other youth clubs so that he can increase his chance of getting admission to a good university.

But he recognizes that his ultimate goal - to become a national team player - is an uphill battle.

“I know it won’t be easy and I need to work harder to achieve the goal. But if I keep working on it, I believe that I can do it.”

The teen says he hopes to emulate Lee Young-pyo, a retired national footballer.

“I like his great football skills,” he says. “But what I like most about him is his perseverance and the equanimity that he always maintains even when he faces challenges in the game.”

“I think I am lucky because my teammates are mostly really considerate. I assume most of them know where I come from, but they don’t bring the issue up at all in case it might hurt me.”

Instead, Kim tells his friends about his life in North Korea and what it was like on his journey with his mother through China and Cambodia. He said football serves as a good medium to build strong bonds with others.

“If you are part of a team, you can become close to other teammates because you all have the same goal. That really strengthens my relationships with my team members, and they are my closest friends.”

Kim says he doesn’t have many defector friends because not many North Koreans of his age cross the border.

“But I do know some young North Korean defectors, and they sometimes complain that it’s hard to catch up with the school courses and get along with South Korean classmates,” he said.

According to a poll conducted by the Korean Educational Development Institute, more than a third of young North Korean defectors feel discriminated against and want to live in another country other than South Korea.

The survey was conducted by Kim Shin-hee, a researcher at the institute, on 287 middle school students in August and September 2012.

The study showed that 36.9 percent of the respondents, or 106 young people, felt alienated and wanted to live in another country because of discrimination.

The Ministry of Education says the dropout rate for North Korean defector students is nearly 5 percent, more than twice the general rate.

Throughout the interview, Kim reiterated that he may be more fortunate than other defectors.

“Many people were so nice and willing to help me,” he says. “Without the deacon and my coach, it would have been impossible to come this far.”

That makes him want to lend a hand to other defectors.

“After I become a national football player, I want to support other young defectors who wish to become football players,” he says. “I think it would be good if I can establish a foundation for that purpose. In that way, I think I can return the help I’ve received from my supporters.

“With that in mind, I can endure loneliness and hardship now, being separated from my family in Seoul.”