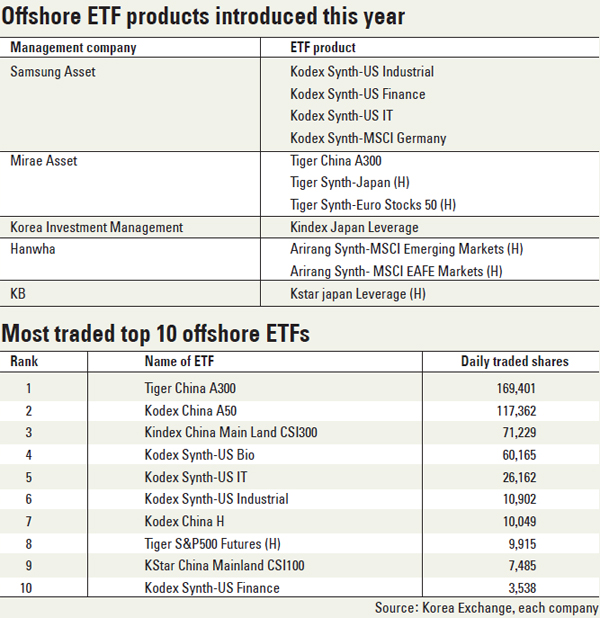 Although the Japanese market on Monday didn’t do too well, investors bought more than 10 billion won ($998 million) of the products.

While investors have been loosing interest in the Korean stock market, which is considered to be in limbo, investors in recent years have turned to more lucrative offshore equity markets.

“As it has become difficult for local investors to rake in profits that match their expectations, more and more are turning their interest overseas,” said Lee Jeong-hwan at Samsung Asset Management.

Expectations for advanced economies in particular have been expanding. While there is continuing faith in the steady recovery of the U.S. economy, despite the recent downward revision of its annual growth rate by the World Bank, investors expect the European market to further pick up momentum as large liquidity will likely find its way there after the European Central Bank earlier this month lowered its key borrowing rate.

Among the many offshore investments, ETFs linked to overseas market indices recently have been gaining momentum. When ETF products were introduced to local investors in 2007, they were not widely popular. In fact, last year there were only 13 such products and most were concentrated in investments tied to basic indices in China and South America. Hardly any ETF products were investing in advanced markets.

So to invest there, investors who made direct investments on such offshore ETFs without going through a local asset management company.

For individual Koreans, there are several difficulties with making a direct investment. Getting information on foreign ETFs isn’t easy and the risk is high. Another problem is acting quickly given the time difference.

The recent increase in interest on offshore ETFs is largely attributable to a growing number of choices available and diversification.

Samsung Asset Management last week launched three offshore ETFs. One is investing in the industrial indices on the S&P 500, another in U.S. financial indices and another in technology indices. These three products immediately joined the top 10 most traded offshore ETF products.

However, investing in foreign markets comes with a risk. For the time being, the biggest problem is the won-dollar exchange rate.

Currently, market experts say that when investing in offshore markets, it is best to invest in those that hedge on foreign currency, particularly since the won has remained strong against the U.S. greenback. The won, which started off at 1,050 against the U.S. dollar, has in recent months appreciated to 1,020. It even fell to 1,015 earlier this month, and many market experts project it could go below 1,000 later this year.

Under such circumstances, the profit from investing in offshore products could shrink when converting back to the Korean won.

When investing in offshore ETF investments, one needs to be clear on the tax rate.