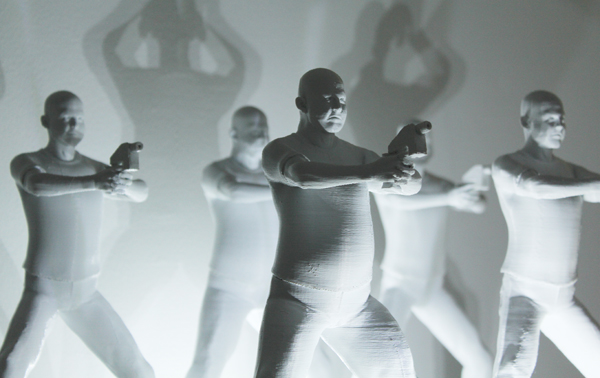 Figures on display by German artist Oliver Griem for the exhibition“Universal Studios” at Seoul Museum of Art. Provided by the museum

International artists have arrived at a very central location of Seoul.

The Seoul Museum of Art, near City Hall in central Seoul, has invited expats living in Korea for at least a year, who have found jobs, friends, spouses or new inspiration for their artwork here, to contribute their talents to the exhibition “Universal Studios Seoul.”

“Rather than presenting something familiar, we wanted to provide some cultural stimulation to locals here,” said Kim Hong-hee, director of the museum, during a press conference Monday.

“The goal is to explore whether there is a chance of an amicable synergy effect being created between them and Korean artists,” Kim said.

Although there have been many projects inviting participation from overseas talents, this exhibition takes the idea one step further by adding more depth to a reflection of Korean culture through foreign eyes.

The museum imposed a rule that artists could not participate if they were in Korea on a short-term residency program or had lived here for less than a year.

“We wanted to have artists who can cultivate something beyond the curiosity any travelers that come to Korea can feel,” said Jo A-ra, who was in charge of curating the exhibition.

“It is interesting to see whether they have adopted a new style of incorporating items found in Korea in their works or completely picked up some new idea or inspiration.”

A total 13 artists from different countries, including India, Canada, Germany and Japan, were invited to present their works.

Among them, German artist Oliver Griem has lived in Korea the longest, for about 20 years. Another German artist, Ingo Baumgarten, who is teaching at Hongik University, settled here after marrying his Korean wife, whom he first met in Japan.

Some of the artists found a better job offer in Korea, while some simply came out of curiosity.

As all these creatives are based in Korea and have made a life here, the museum wanted to come up with an eye-catching title for the exhibition to differentiate it from other shows by foreign artists.

The name may remind many of the U.S. movie theme park Universal Studios. But for this show, the two words are put together to prove that artists’ “studios” are “universal” spaces in which they can work and live regardless of the country where they are located. 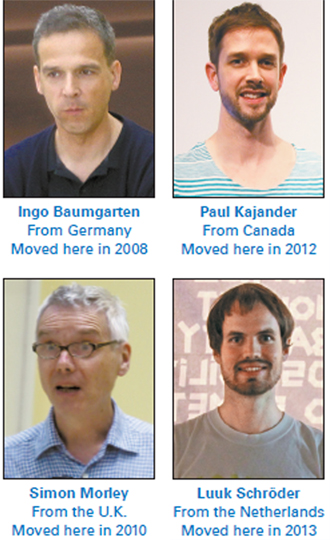 The most controversial term was “cultural fantasy,” which caused the artists to branch out into many different perspectives. Some stretched out to the idea of utopia while some simply felt repulsed.

For Canadian artist Paul Kajander, those words actually made him “cringe” and “shiver.”

“To me, the idea of cultural fantasy seems to [indicate] the inequality to the access of the cultural idea, as if culture is some kind of luxury and that only a certain group of people has privilege to an indulgence,” said Kajander, adding that he thinks fantasy is “dangerous in a sense that it may lead you to exist in a non-reality.”

“I’m acutely aware of how there is a reality which limits conditions,” said Kajander, “and an artist is to be interacting with that set of existing conditions so that you can maybe create some hope or some kind of challenge or a question that leads us outside of these conditions. So, to me, fantasies are not so helpful or useful.”

Kajander therefore focused more on the capitalist or economic side of Korea and documented scenes he found around Euljiro, an area in central Seoul with many shops.

The district captured his eye because it was full of lighting stores displaying basically the same lights but with different layouts. He also made installations using items found at a discount store in Chang-dong in Dobong District, northeastern Seoul.

One of the reasons Kajander left home was due to high living expenses, so exploring the capitalist side of society has always been intriguing to the artist.

“I have always been interested in the structure of power and the critics of power,” Kajander said.

"I got to ask general questions about why we need light and why we need to work late after sunset and how there is a historical narrative to it.”

Indian artist Tallur L.N. also expresses his disturbance over the capitalist world in a broader interpretation of cultural fantasy.

It isn’t hard to locate Tallur’s art at the exhibition because it features a hammering sound that resonates throughout the hall.

The artist invites visitors to use a hammer to insert a nail through a coin into a large log placed in the exhibition entrance while wishing for their dreams to come true.

The piece is named “Chromatophobia,” an abnormal and persistent fear of money.

“Sufferers experience undue anxiety even thought they realize their fear is irrational,” Tallur said in reference to his work.

“They worry that they might mismanage money or that money might live up to its reputation as “the root of all-evil.”

This reporter tried for 10 minutes to push the nail through the coin but still couldn’t make it work. “It’s a therapy,” the artist told the reporter in encouragement.

The repeated action could be a stress reliever, but the more you hammer down on the nail, the more you get obsessed with the action itself instead of the purpose it serves - for a wish to come true.

The artist intended to put only one hammer there because he wanted other visitors to watch the pounding or wishing and to think hard about their own desire to make their own dreams come true.

Because the act is actually about destroying the coin, it can symbolize the way one person’s action to achieve what they want can ruin an experience for another.

In contrast, German artist Alfred 23 Harth showed a more protective perspective of Korean culture. His fantasy is to imagine Korean culture without the influence of the West, before the country officially opened its door for trade in the late 1870s.

“I feel a little bit ashamed about the Western [culture spread among] Koreans,” said Harth, “and I wish that this was never done as my cultural dream is [to see] Korea that remembers [its ancient culture] and brings all the richness out to the world.”

Harth urges that Koreans should focus more on preserving and handing down its own cultural history. He collected broken pieces of china around Cheolwon in Gangwon to show that some precious items are underestimated in Korea.

In the exhibition hall, Harth put those broken pieces on top of a structure reminiscent of a Western-style castle, which is often used to decorate the top of many kindergarten buildings in Korea, in a bid to show irony.

He also depicts his agony over the recent tragedy of the sunken ferry Sewol, which killed almost 300 people while en route to Jeju Island.

“I lost my inspiration after the event,” Harth said. He stopped working on the video project he was making for the exhibition as a result.

The artist then came up with his own way of satirizing the ongoing political issue over the nomination of a new prime minister, a position that became vacant after the former premier resigned after the maritime disaster.

On the other hand, North Korea is the focus of Singaporean artist Shengen Lim, while Japanese artist Kondo Yukako is inspired by the home appliances she has in her Korean home.

Meanwhile, German artist Oliver Griem, who has previously showed an interest in urban development in Seoul, now reflects on a Korean society that is considered to be plagued by inside conspiracies, according to the curator Jo.

Although the museum has successfully gathered artists who can draw out different ideas about life in Korea, it has failed to include artists from more diverse racial backgrounds or gender.

Many of the participating artists are white males from European or North American countries. There is only one female artist among the chosen 13.

“We have acknowledged the problem so have looked into fixing it, said director Kim of the museum, “but in reality, there are higher numbers of male artists from North America or Europe in Korea who have lived in Korea long enough and also show some quality works.”

“We will try to make an exhibition that is up-front about diversity, as it is one of the ideas the museum pursues,” assured Kim.

If visitors cannot see how the artworks are tied to Korea, they can sit down and talk to the creators for a better understanding.

The artists will participate in a roundtable discussion to share their thoughts on the exhibition and their interpretation of living in Korea based on prior experiences of living elsewhere.

The discussion will be held at 2 p.m. on June 26 in the basement of the museum. British artist Simon Morley and Tallur will be in attendance to converse with other experts.

Kajander and Dutch artist Luuk Schroder will take part in another round of talks titled “Now that There is Nowhere” on July 3 at the same venue.

While 12 of the artists are still active in the local art scene and displayed their recent works for the exhibition, Emil Goh, an Australian artist who actively collaborated with local talents after he came to Korea in 2003, has now passed away.

Items that may help people reminisce about Goh’s earlier works are on show at the museum.

The exhibition “Universal Studios Seoul” will last until Aug. 10 at Seoul Museum of Art.

The museum is closed on Mondays. Admission is free. To get to the museum, go to City Hall Station on line No. 1 or 2, exit 10.