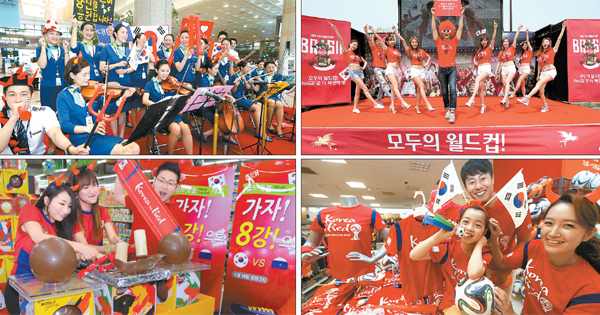 With the Korean national football team having its first match at the 2014 World Cup in Brazil this morning, Korean companies from airliners to retailers are showing their full support. The Korean team will be playing against Russia. From top left: Air Busan flight attendants yesterday hold a special concert at Gimhae International Airport domestic terminal in support of the Korean national team. By Song Bong-geun

Dancers from Coca Cola, which is an official sponsor of the tournament, demonstrate a dance move in Yeouido, western Seoul yesterday, that they recommend the public imitates when they gather to watch games in public places such as City Hall. Provided by the company

Nonghyup Hanaro Club introduces a football-shaped chocolate, World Foot, while holding an event to cheer that national team to victory. The chocolate is the same size as a football and weighs 1.1 kilograms (2.4 pounds). [NEWS1]

E-Mart is selling merchandise including Red Devil T-shirts, headbands and horns. The retailer said if Korea wins today against Russia it will sell all 250 items at its stores at steep discounts. [NEWS1]