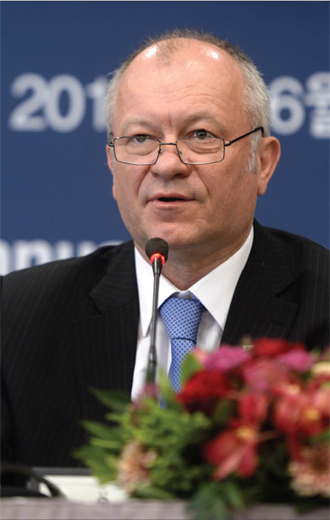 Bosch Korea’s Hermann Kaess speaks to the media yesterday at the Plaza Hotel in Seoul. [NEWS1]

Bosch Korea, the local unit of the Germany-based auto parts and appliance maker, said yesterday it will invest 62 billion won ($60 million) this year as it celebrates its 25th anniversary.

“Twenty-five years in Korea is an important milestone for Bosch,” said Hermann Kaess, Bosch Korea president and CEO, yesterday in Seoul. “We will stay on course to continuously support long-term growth in Korea.”

Bosch, which legally established its Korean unit in 1989 after investing in the country since 1972, had consolidated sales of 1.8 trillion won in fiscal year 2013.

The company said it expects double-digit regional sales growth this year, mainly due to the automotive technology business.

According to Bosch Korea, “60 billion won will be invested in the Daejeon plant for the manufacturing of direct diesel injection and gasoline direct injection products to maintain localization efforts and contribute to Korea’s long-term development.”

The company added that 1 billion won will be invested in Bosch Rexroth, which opened a new plant in Busan in October. The plant produces industrial hydraulics, as well as electric drives and controls.

Kaess said the company is keeping an eye on Korea’s environmental regulations such carbon emissions and fuel efficiency.

According to the Korean Ministry of Environment, automakers will be required to attain fleet averages of 17 kilometers per liter (40 miles per gallon) and greenhouse emissions of 140 grams per kilometer by 2019. By 2020, greenhouse emissions levels are expected to be similar to those in Europe.

“Bosch is responding rapidly to trends in the Korean market,” he said. “To address these challenges, Bosch offers a broad range of technological solutions in Korea to reduce fuel consumption and gas emissions of diesel and gasoline engines up to a complete electrification of the powertrain.”

The German CEO said the company also has high hopes in micromechanical sensors (MEMS), a key technology when it comes to the Internet of Things and services.

“Bosch’s strategic objective is to create solutions for connected mobility, connected manufacturing, connected energy systems and connected buildings,” said Kaess. “It is part of our strategy to focus on these new trends, and strengthen our innovation to provide products that spark enthusiasm and fascination with users.”