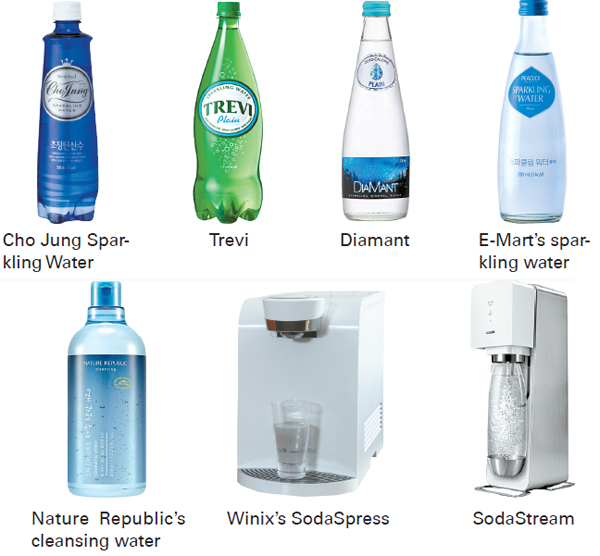 For Park Kyung-jin, a 40-year-old homemaker, summer is difficult as she struggles with her two children - one in fourth grade and the other in first grade - who have eczema. As the weather becomes hotter, her children are desperate for cold, carbonated drinks like coke and cider.

“Most carbonated drinks contain additional sugar and artificial pigments and as a mother, how can you buy these drinks if your children have dermatitis?” Park said.

This summer, Park decided to start buying sparkling water at a discount store near her home.

“I mix plum extract or fermented vinegar with sparkling water,” she said. “Then it tastes like a common carbonated drink. It also feels healthier.” 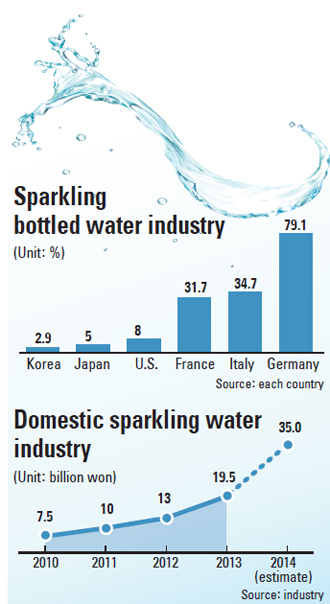 Park and her children enjoy the new drink so much that she is considering buying a refrigerator or water purifier that can dispense fizzy water.

Park is among a growing number of Koreans turning to the trend of fizzy water, which is said to settle digestive disorders and help with diabetes, high blood pressure and constipation. Consumers are increasingly choosing sparkling water over mineral water in a bid to be healthier. And the trend has companies rushing to get a piece of the carbonated water market.

Recently, Samsung Electronics added a new function to its popular refrigerator model Zipel T9000 that makes soda water. The refrigerator can make up to 182 330-milliliter (11-ounce) bottles of sparkling water with one carbon dioxide container, which costs 24,000 won ($23).

Samsung did not plan to expand the Zipel product line so quickly. Although the sparkling water industry in Korea has grown 40 percent each year since 2010, the company was not sure if consumers would be interested in a refrigerator with sparkling water. So before adding a new function to the Zipel T9000, the company released Zipel Sparkling refrigerator last October to test the consumer response.

The refrigerator gained attention after it appeared in the hit drama “My Love from the Star” (SBS). In one scene, actress Jun Ji-hyun, who plays Chun Song-yi, drank a cup of cold sparkling water from the refrigerator to overcome a hangover.

Since the Zipel Sparkling refrigerator proved successful, Samsung Electronics permanently added the function to the Zipel T9000 and to the Chef Collection model.

Competition to make fizzy water is also rising among local water purifiers such as Winix and Youngone Corporation.

Earlier this month, Youngone Corporation started selling a purifier with a sparkling water function through a home shopping company and Winix introduced a water purifier with the same function.

“Consumers will be able to drink sparkling water at a reasonable price,” said Kim Keum-dong, head of planning at Winix.

Coway, a leading Korean water purifier, is expected to release a new purifier as early as next month.

“Since 2008, we have been displaying sparkling water purifiers at overseas exhibitions targeting Europeans who enjoy fizzy water,” said Jang Jung-kyu, head of product planning at Coway. “For many years we have accumulated related technology and consumers’ responses, and have been preparing [for business] in the domestic market.”

Foreign companies are also vying for a spot in the local sparkling water market, including SodaStream, which is promoted by actress Scarlett Johansson. SodaStream has become popular after a promotional video featuring Johansson spread on YouTube and social networking sites. Johansson is known to have said that the secret to her fitness is sparkling water, which helps to discharge waste from the body.

Similar products include Twist’n Sparkle, Tucuxi Soda, Piccini and SodaSparkle, which cost between 100,000 won and 200,000 won.

Even cosmetics companies are beginning to use carbonated water in their products. The idea arose when actress Kim Hee-sun, 37, said on a talk show that she uses sparkling water to wash her face because it helps maintain firm skin and reduces puffiness.

Immediately after her remarks, local cosmetics company Nature Republic released a cleansing solution made of carbonated water from Jeju and Laneige, a brand under Amore Pacific, created a line of sparkling water products.

With competition for carbonated water heating up, companies have lowered their prices.

Last year, Lotte Chilsung lowered the price of Trevi and changed the packaging from a glass bottle to plastic. Hite-Jinro released Diamant at the lowest price in the market.

Local discount stores such as E-Mart also have their own sparkling water. E-Mart released a private brand late last month that costs 990 won for 330 milliliters, which is significantly cheaper than Perrier at 1,680 won.

“In Europe, sparkling water accounts for more than 30 percent of the bottled water market,” said Jang Dae-seon, head of the Korea Tansansu Association. Tansansu in Korean means sparkling water. “In Korea, the market share of sparkling water is less than 3 percent, which means that there’s a big opportunity for growth.”