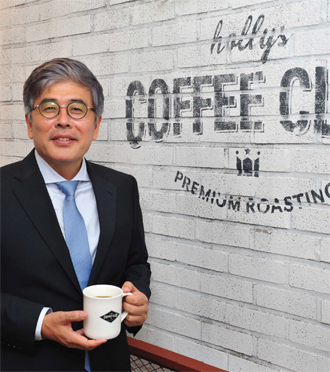 In recent years, Koreans’ love for coffee has grown immensely and their tastes have become more sophisticated. Even for a simple cup of drip coffee, many customers want to know where the beans came from and how they were roasted.

In line with the trend of maturing consumers, Hollys Coffee, which opened its first store in 1998, opened a store with a new concept in the heart of Daehangno in Jongno District, central Seoul. To celebrate the company’s 16th anniversary, Hollys Coffee Club opened yesterday selling drip coffee at a reasonable price along with espresso drinks such as ristretto.

“The country’s coffee industry has passed the growth stage and has entered a matured stage,” said Shin Sang-chul, chief executive of Hollys Coffee, at a press conference at Hollys Coffee Club. “At this point, we have no plans to expand in terms of quantity but rather in quality.”

Shin explained that differentiating the brand by quality is the best strategy to overcome competition.

“The coffee culture in Korea has passed the stage when consumers drink coffee regardless of the brand and wherever it is most accessible,” Shin said. “We want to allow consumers to experience the charm of coffee that gives different tastes and aromas depending on the origin [of the beans] and the extraction method.”

“It takes only two minutes to serve a cup of hand-drip coffee,” said Lee Ji-eun, chief marketing officer at Hollys Coffee. “Normally at other roasters, it takes about 10 minutes. We reduced the waiting time because we want to popularize [hand-drip coffee].”

The coffee chain plans to open five stores this year, including the one yseterday, to specialize in hand-drip coffee. Of the five, four will be in Seoul and another five stores will open next year.

The new store is part of Hollys Coffee’s effort to cater to coffee aficionados and comes after Starbucks Korea in March introduced a line of single-origin premium coffees known as Starbucks Reserve. A tall-size reserve coffee costs between 6,000 won and 7,500 won.

“The hand-drip coffee that we offer is cheaper than Starbucks Reserve,” Shin said. “Also, we’re different in that we don’t use a machine but our baristas pour water to brew the coffee. We also use beans roasted in the country.”

“I would say China would be the most important [market] for us just based on size,” Shin said. “While the coffee industry in Korea is at its mature stage, the industry in other Asian countries is in its embryonic stage. ... China is one of the countries responding quickly to the [business] strategies we make.”