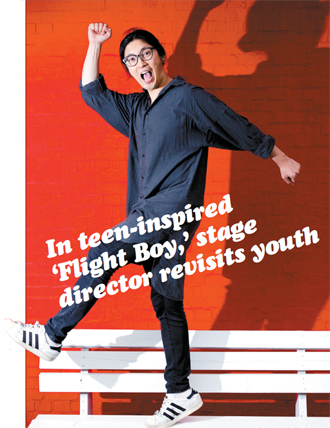 Yeo Shin-dong is a big deal in the stage-production crowd.

As one of the hottest designers around, he’s taken part in some 20 works in the last year alone and received recognition at the Dong A Play Award in 2010, followed by the Korea Musical Awards in 2011 and the Korean Play Awards in 2012.

Yeo is not one for grand gestures or eye-catching spectacles. Rather, his mark on musicals such as “Washing” and “Moby Dick,” and the plays “History Boys” and “I Am My Wife,” are subtle and prove that he’s big on detail.

Each stage Yeo presides over is intricate, and the carefully placed props beckon to the audience.

This is likely why the man who began his career as a stagehand eventually moved on to stage design and is now a director.

Last year, Yeo made his directorial debut with the adult-only pantomime “Savoy Sauna,” a show based on a public bathhouse experience he had as a child.

And again, Yeo is trying his hand at something new: a play inspired by teenagers with the National Theater Company of Korea.

For “Flight Boy KW4839,” which runs until Saturday, Yeo spent most of his time leading up to the June 13 opening day decking out Baek Sung-hee Jang Min-ho Theater’s stage to emulate the interior of an airport and an airplane.

It is the play’s powerful images that do the talking. The show does not have drama or a message, according to Yeo, but there is a central concept.

“[The play] is a space to awaken the five senses and to prompt self examination,” said Yeo.

And as this description suggests, it’s not a show that’s easily deciphered.

For someone who likes to experiment with new ideas and art forms, Yeo is as humble as they come.

He has a Gyeongsang dialect, and his way of speaking draws you in. Yeo uses gestures like an actor would, and he whispers from time to time. He has an eclectic persona, kind of like a secret treasure box.

Above left and right: Illustrations and images from the play “Flight Boy KW4839” Provided by the National Theater Company of Korea

Yeo sat down with the JoongAng Sunday, an affiliate of the Korea JoongAng Daily, to talk about how he got on board with the production influenced by youth.

In March last year, Yeo met 17 teenagers who were picked through a talent quest orchestrated by the National Theater Company of Korea.

After spending some time with them, he wanted to give something back to the kids who clearly had an interest in performance art.

“At first it was frustrating because it wasn’t like I could just make a set with the kids or teach them,” said Yeo. “There were kids who wanted to be actors, and I pondered as to what I could give them.”

“Then in May, I decided that a show was the best solution,” Yeo explained. “And with that in mind we got to know each other.”

Through meeting with the teenagers on a weekly basis - and through the words and drawings they came up with - Yeo saw how the youth see themselves: as travelers full of anxieties and hopes, and as a minority with countless censorship imposed on them by adults.

The plot of “Flight Boy,” about a group of teenagers at an airport in a fictional land, practically wrote itself. The journey begins with teens taking off on a plane and journeying to the present in a sort of “travel experience” performance.

“Taking the two months that the kids spent exploring themselves, I wanted to turn that into an art performance,” said Yeo. “It was more about turning those kids into a stage spectacle.”

Through the pilot play “We are Here,” the show was approved by the National Theater Company’s Teenage Play Re-lay program as it fit perfectly with this year’s theme of “Exploration and Challenge.”

The only hitch was that it was impossible to cast teens, so the second best thing was to hire actors in tune with their youth.

To find the right candidates, rather than looking at performances or talking skills, Yeo picked actors that appeared young at heart.

“Although it would have been more meaningful to cast teenagers, the homework lay in finding suitable actors,” said Yeo. “Even if they didn’t have any prior acting experience, those who were proactive about trying something new and not afraid to expose themselves were cast.”

Yeo figured that despite the lack of professional experience, candidates with such qualities would be able to better examine themselves.

From fantasy to realization

“Flight Boy” also asks its viewers to take part. Rather than just coming into the theater and watching a show, the audience goes through various checkpoints and security clearances, just like the teens on stage before they board their flight.

The kids turn into adults, and vice versa. As soon as they step inside the plane, the flight attendants become students and sit at their desks in a plane that doubles as a classroom.

In a similar way, the viewers become part of the scenery.

When the plane takes off, noise and vibrations are simulated. PA announcements and adolescent banter unfold.

There is no narration. The production just encapsulates a moment where teens can enjoy the present in a fantasy-like environment.

“If we talk in art terms, the teens are the objects and the synopsis is that these kids are contained in the time and space that is the airplane,” said Yeo.

“I tried to think of the best way to depict teenagers, and so I placed them inside the plane. But, of course, a theater as a space comes with a lot of impact, and because of this it’s closer to a play than an art exhibition,” said Yeo.

When asked if the experimental direction would be too much for young people to take in, Yeo said that the show is intended as much for the adults as it is for the teenagers.

“Even last year, when I held a workshop for kids, I think adults took more away from it,” said Yeo.

“Through the “teen” label, I think the audience will be able to dig deep and examine themselves.”

For Yeo, in terms of his perception, there is no “adult” or “youth.”

“[The play] wasn’t written to be heavy, but it still moves older viewers,” he said. “I guess kids have the same problems as adults. The same anxieties about the future, but it is just that for them it’s their first time feeling it all.”

This way of throwing questions at the audience is not new for Yeo. In his debut piece, it was much the same.

“Savoy Sauna” juxtaposed the habitual with the new.

Although a familiar landscape for most Koreans, the bathhouse was examined from a foreign gaze, which led viewers to ask questions about the self.

“The important thing is not the place but the chance to meet with yourself intimately,” explained Yeo on the creative use of space and setting in his work.

“Every place and person that an artist depicts is not an imitation but a reinterpretation of something that they’ve thought of,” the director said.

“I try to seek out spaces that lead to accurate self-examination. It’s only when you know yourself well that you can see other things.”

Like in his latest work, which deals with rebellion and the anxiety of teenage years, Yeo’s life has also been riddled with one exploration after another.

He entered an academic high school, ended up graduating from an arts high school and although he majored in handicraft design at an arts university, he went back to Korea National University of Arts to study set design.

“It was never my intention to be a director. I see this as just a means of doing art,” said Yeo. “I’ve wanted to be an artist for as long as I can remember. I became a set designer, and directing was an experiment as well as studying.

“To be honest I think what I’m doing is an extension of what I’ve always done but others are calling it directing.”

On why he likes to experiment with new stage forms, Yeo said it’s because he “knows the power of performance.”

Although the divide between the stage and the seats are clear, Yeo explained he is moved by the capacity to make the audience “feel sad or get goosebumps.”

To reach this goal, Yeo said words are not so important.

“As a stage designer I remember thinking so many plays were authoritative and too refined, not to mention difficult to understand and easy to fall asleep in,” the artist elucidated.

According to Yeo, he looks for works where the audience has an epiphany. Rather than being moved by a message, he wants viewers to feel overcome by the energy of a play.

“If you want a message, you can read a book,” he said. “I don’t think a play should be the same as a book.”

During “Savoy Sauna,” some people didn’t like the fact that there was no narration. Meanwhile, those who are big on music or art loved Yeo’s bold attempt.

Rather than trying to send out intricate messages to his viewers, Yeo asks them to come with their senses on full alert and to let the energy of the stage do the rest.

“When you watch a Pina Bausch piece, you are moved because of the energy rather than the refinement and feel that you need to be attuned to all your senses,” said Yeo. “Tears, nose, ears, lips and skin, you need it all. It’s to get to that place that I’m striving.”