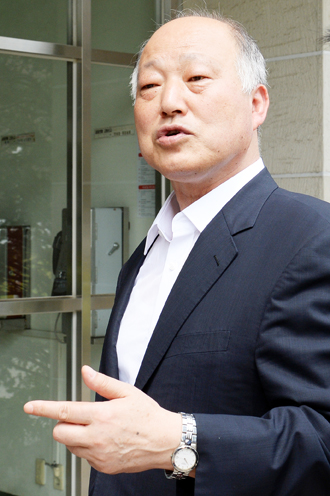 The nominee for education minister was accused of plagiarism yesterday by an opposition party lawmaker, who alleged that the candidate lifted a thesis from one of his students while working as a university professor.

Kim Myung-soo, 66, a professor at Korea National University of Education and the president of the Korean Educational Research Association, was tapped on June 13 to serve as education minister and to simultaneously fill the newly established post of deputy prime minister for education, society and culture.

Park Hong-keun, a lawmaker with the opposition New Politics Alliance for Democracy (NPAD), accused the professor of copying in its entirety the 79-page thesis of a master’s student studying under him at the school.

He presented two nearly identical theses as evidence, claiming that Kim summarized the thesis of his student, only identified by his surname Jeong, and condensed it into a 24-page paper with the same content.

Representative Park said he found the documents by searching through the National Assembly Library’s archive, which contains theses from universities nationwide.

According to the materials Park released, Kim’s thesis used most of his student’s introduction, hypothesis, background, research methods, research results, conclusion and summary.

Jeong, who studied educational administration at the university, received his master’s degree in February 2002, submitting his thesis entitled, “The Effect of Autonomous Classroom Management on the Lives of Students.” Park claimed that at the time, the student was studying under Kim’s direction.

In June 2002, another thesis was published in a local journal, with the same title and almost the exact same content, with Kim and Jeong appearing as co-writers. Kim’s name appeared first, which is common in academia for the primary writer.

“Under the guidance of Kim, Jeong submitted the thesis and obtained his master’s degree,” Rep. Park told reporters yesterday. “Four months later, Kim published a summarized version of the thesis and introduced himself as the first writer, while his student - who actually wrote the thesis - was listed as the secondary writer.

It is a typical approach in order for a professor to steal his student’s thesis - and is regarded as apparent plagiarism in academia,” he added.

Park argued that Kim was not qualified to fill the ministerial seat and demanded he step down.

“Because the Ministry of Education is a leading government organization in charge of laws and policies managing theses and other information, we should apply a far stricter standard in inspecting the qualifications of a nominee for this post,” he said.

In 2006, Kim Byung-joon, a candidate for education prime minister under the Roh Moo-hyun administration withdrew his nomination just 13 days after he was named following similar plagiarism accusations.

He stepped down following an intense confirmation hearing in which he was grilled by Grand National Party lawmakers, the opposition at the time.