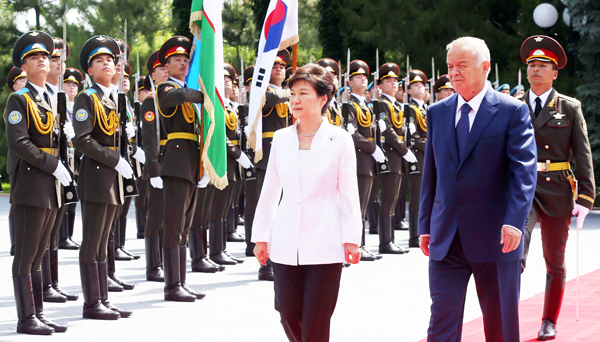 President Park Geun-hye, left, and Islam Karimov, president of Uzbekistan, inspect an honor guard yesterday in a welcoming ceremony in the presidential palace in Tashkent. They had a bilateral summit meeting and signed a joint statement agreeing to deepen the two countries’ relationship. [Joint Press Corps]

President Park Geun-hye held a summit yesterday with Islam Karimov, president of Uzbekistan, and signed a joint statement agreeing to deepen the two countries’ relationship to a strategic partnership in economic, political and other sectors.

Uzbekistan is the first stop on Park’s three-country, six-day tour of Central Asia, which will also take her to Kazakhstan and Turkmenistan as she lays the foundation for her ambitious “Eurasia initiative.”

The initiative, proposed last October, is a vision the president came up with for regional and economic cooperation between Europe and Asia.

She also paved the way for her so-called sales diplomacy to boost economic cooperation with other nations and help Korean companies.

“Uzbekistan is becoming a model in Central Asia through its continued high economic growth,” Park said at the summit, “and I believe this is the result of the joint effort of the president’s leadership as well as its people.”

Karimov responded, “Korea is a strategic partner with a large economy and accumulation of science and technology.”

The two leaders decided to support new joint projects in gas development and solar power. This includes Korean participation in a Russian-Uzbek consortium’s $4 billion project developing the Kandym gas field in the Bukhara region of central Uzbekistan and building a gas processing plant there.

They agreed to cooperate on another $310 million project to construct a 100-megawatt solar power plant in the city of Samarkand, noted for its central position on the Silk Road between China and the West.

In their agreement, the two leaders agreed to strengthen practical cooperation in areas like trade and investment, the energy sector, science, culture and education, and expand further to areas like information and communications technology, the environment, textiles, and road and rail construction. Uzbekistan is South Korea’s biggest trading partner in Central Asia, with bilateral trade amounting to around $2 billion in 2013. The two countries signed three agreements for further economic cooperation after the summit, where Korea agreed to provide grants and loans to Uzbekistan to advance its social and economic development.

They also signed a memorandum of understanding to establish a basic framework for investment cooperation. Park took the opportunity to explain to Karimov her policies of trustpolitik to promote reconciliation with North Korea, her vision for peace and cooperation in Northeast Asia and also the role of the Eurasia initiative.

A Blue House official said, “During the summit, many cooperative methods were sought with Central Asia, located at the center of the Eurasia continents, for the realization of the Eurasia initiative.”

The joint statement contained language warning North Korea against further nuclear tests and calling on Pyongyang to return to the Non-Proliferation Treaty, urging the isolationist regime to become a responsible member of the international community. They also agreed on exchanges of personnel including government officials and lawmakers, as well as experts, volunteers and even exchanges of machinery. The previous day, President Karimov went in person to greet Park as she arrived at Tashkent International Airport on Monday from Seoul, a gesture of courtesy. A sizeable Korean community of 180,000 people lives in Uzbekistan, and Park took the opportunity to meet them Monday evening after arriving in Tashkent.

The president was accompanied by a 93-member economic delegation and attended a business forum yesterday.