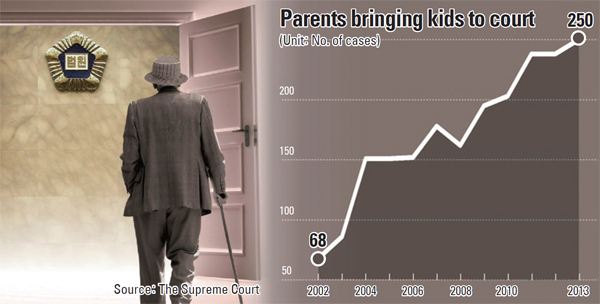 For Lee, a 74-year-old widow living alone, the only asset of any value she inherited from her husband when he died in 1998 was a two-story house in Guro District, western Seoul.

Lee had three children, but she always favored her first son, who immigrated to the United States in his 20s and is still struggling to succeed there. The mother decided to bequeath the house to the first son, basically cutting out her second son and daughter from any inheritance. Lee moved into a one-room basement studio and made a living crafting handmade hats. She regularly sent money to her oldest son in the United States, who retains legal ownership of her house.

In 2012, Lee was felled by a stroke and had to undergo brain surgery. She was partly paralyzed for the next six months. Her medical bills added up to about 30 million won ($29,374). She called her son in the United States for help. His reply: “I don’t have any money, mom.” The second son and the youngest daughter paid the medical bills and Lee sued her first son, demanding he support her. In December 2013, the Seoul Family Court ruled in favor of the mother and called on the son, now 54, to pay 30 million won immediately and 2 million won every month.

In Korea, there are nicknames for parents like Lee. One is “poor after bequeathment.” A more brutal nickname is the “new generation of goryeojang,” coined after a custom during the Goryeo Dynasty (918-1392) in which children carried their old and useless parents deep into the mountains and left them to die.

Under Article 974 of the Civil Act, all Koreans have a duty to support their parents. But for years the law was considered a cultural norm rather than an actual legal duty, and parents didn’t do anything when they were neglected by their offspring.

However, starting in the 2000s, parents started bringing their disappointment in their children to court to accuse them of neglecting their duty. According to the Supreme Court, the number of lawsuits demanding children support their parents increased from 68 in 2002 to 250 in 2013.

According to records of local courts nationwide, 48 of the 151 parents who filed lawsuits between 2007 and 2013 demanding their children support them bequeathed most of their assets to their children, apparently expecting their children would take care of them in return. The average age of the 48 parents was 77.1 years old and their monthly incomes were only about 340,000 won each. About 94 percent of them managed to survive on the national pension or other insurance and 36.1 percent did not receive any support from their children. About 70 percent lived alone.

“More and more children neglect their traditional duty to support their aged parents,” says Gwak Bae-hui, head of the Korea Legal Aid Center for Family Relations, “and the parents, who gave everything to their children and now have nothing, are exercising their right to saying, ‘If you don’t want us to live with you, give us our money back.’ It is a tragedy but also an unavoidable trend.”

Emotional fights between the parents and children are commonplace at trials, judges say.

“It is rare for a child to call his father ‘dad’ once they’ve come into the courtroom,” a judge at the Seoul Family Court says.

The children being sued express their coldness or anger by calling their parents by their formal names instead. Some resort to abusive language or fight with siblings who are more supportive of their parents, judges say.

“Even when the parents win the lawsuits, they suffer emotional pains at the trials,” a family affairs consultant says.

Family specialists advise parents to change their attitudes toward children. They should not bequeath assets before they die, the specialists say, even if the children desperately need money for marriage or for studying.

“Currently, many middle-class parents spend about 1 million won per month on average on a child for their private education,” says Lim Chae-wung, a lawyer. “So if they have two kids, they have little money to save for their lives after retirement.

“Even if they invested a lot of money on the education of their children, it is not guaranteed that the children will get a decent job,” Lim says. “So there is no guarantee they will support you anymore. You need to draw a clear line in these matters.”