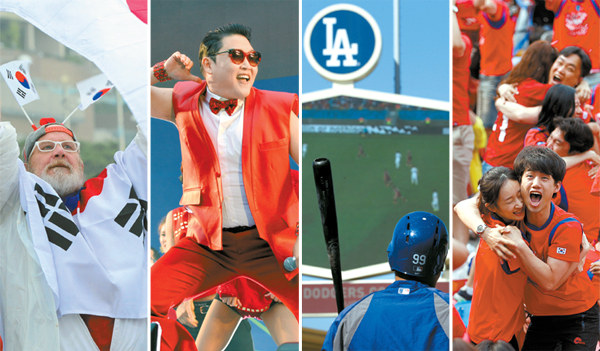 For the Korean national football team’s first match in the 2014 FIFA World Cup in Brazil yesterday at 7 a.m. local time, which ended in a 1-1 draw, tens of thousands of people filled the streets, squares and sports stadiums to cheer for the players in their fight against Russia.

The police estimated that about 57,600 people came out to cheer and 18,000 people crowded into Gwanghwamun Square in central Seoul and 23,000 along the Yeongdong-daero, a 14-lane boulevard next to the Coex mall, southeastern Seoul.

“I wanted to enjoy the World Cup to the fullest because it is held every four years,” said Kim Se-ri, a 23-year-old student among the red-shirted crowd at Gwanghwamun Square. “I know it is hard, but I hope the national football team makes it to the second round of the World Cup.”

The passionate cheering reached a climax when striker Lee Keun-ho scored the first goal in the second half. When the ball bounced off Russian goalkeeper Igor Akinfeev and into the goal, people who were watching the match in the square cried out “Goal!” and hugged each other while jumping for joy.

When the match was finished, the Red Devils, the team’s official supporters who hosted the event in the square, distributed garbage bags for free and asked people to pick up garbage. The square was cleaned up shortly thanks to the crowd.

The match brought together football enthusiasts in regions outside of Seoul as well.

“I woke up early to pray for victory of the Taegeuk Warriors,” said Lee Jae-uk, 46, who watched the match at Gwangju World Cup Stadium. “Cheering with the crowd makes me more focused on the match, and it feels like we have become one.”

At the Gwangju World Cup Stadium, where Korea beat front-runner Spain and made it to the semifinals of the 2002 World Cup in South Korea and Japan, more than 1,000 people gathered to watch the match and root for the team.

Another hotspot was Haeundae Beach in Busan, where despite the drizzling weather, about 1,000 people flocked to a 500-inch screen set up at the beach.

Kang Yeong-su, 35, who watched the match at the beach, was wearing the uniform that the national football team donned during the 2002 World Cup.

“I have various kinds of [Korea] uniforms, but I chose this one in the hope of [advancing to the semifinal] again,” he said.

As the game was on during commuting hours, some companies decided to hold a social gathering for employees.

The country’s largest steelmaker Posco, formed a cheering squad with CEO Kwon Oh-joon and about 300 employees at its auditorium in Pohang, North Gyeongsang, and Hyosung, a major Korean chemical company, gathered employees together at its headquarters in Mapo District, western Seoul, to watch the game.

The Red Devils said they will cheer in the streets for the two remaining matches in Group H against Algeria on Monday and Belgium on June 27 local time in nine cities including Seoul. The center of celebrations in Seoul will stay at Gwanghwamun Square.