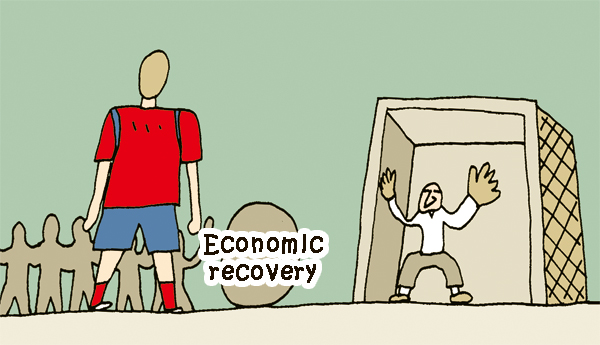 Our economic performance should matter as much as how our national team performs at the World Cup in Brazil. The aspiration for a better economy tops the people’s wish list for its government in all surveys. What the people want to see is real improvement in livelihoods and incomes, not just in the export statistics or other data. Outgoing deputy prime minister for the economy Hyun Oh-seok said he regretted that he was stepping down without finding a way to increase jobs available for young people and boost the business for Korea’s mom-and-pop stores.

The next economic team has entered the dugout. The nominee for the double post of deputy prime minister for the economy and minister of strategy and finance, Choi Kyung-hwan, still needs to be approved by the legislature to start his work. But given his past credential as ruling party floor leader and minister of knowledge and economy, his confirmation won’t likely be difficult. The wheel of the economy has been surrendered to Choi and An Chong-bum, who was named presidential secretary for economic affairs. The team looks entirely different from its predecessor.

Park Geun-hye’s first economic team - Hyun and Cho Won-dong - were chosen from the non-political sector. They lacked connection with the president and her key aides. They were quickly named to fill vacancies in such key posts in the early stage of the administration when President Park had to reverse several of her appointments. Neither of the men were involved in Park’s presidential campaign or her transition team, and they remained somewhat out of tune and overly passive with the president in drawing up a blueprint for economic governance. Personality might have played a part as well. But mostly they were unable to do their jobs properly because they lacked any real authority from their boss. Team spirit was absent from the beginning. In order to please or not upset a boss they weren’t familiar with, they mostly took orders from her. It was hardly a winning strategy. Luck wasn’t in their favor either. The first economic team scrambled to fulfill both campaign promises and popular demands for economic equality. After wasting the first year fumbling, it came up with a bigger picture and framework - the so-called three-year outline to innovate the economy - early this year. But before it could set sail in that new direction, it stumbled with the rest of the administration through the aftermath of the worst-ever maritime crisis for Korea. The captain was forced to leave before he ever really gripped the wheel with confidence.

Choi and An are well qualified to bring new energy to their jobs. They were key economic advisers to President Park. They mentored her on the campaign trail. They share common ideas and goals for the economy. They advocated for Park and her economic policies at the legislature. They will have a totally different approach from that of Hyun and Cho. They will also be more skilled in dealing with people thanks to their political experience. Choi and An also are co-alumni of the University of Wisconsin-Madison with Yoon Sang-jick, minister of trade, industry, and energy, and Phang Ha-nam, labor minister. It will be easier for them to find coordination and cooperation within the government. Choi is reported to have had a lot of say in the latest economy-related appointments. The team is now fully aligned.

The next step is how well it can play. Top priority has been placed on reviving the economy. The economy needs immediate traction to pull out of a slow-motion slump. For the longer run, it needs retooling and new growth engines for sustainable vitality. The team shouldn’t focus too much on either short-term stimuli or restructuring for long-term growth. Choi must exercise balance and farsightedness in steering the economy.

The new team also has one perilous weakness. As architect of Park’s campaign promises, Choi may be restricted to those original plans and miss new creative ideas. The team must be decisive and flexible, throwing away failed ideas and able to persuade the president of new approaches and options. Most of all, the president should place faith in her new team and allow them freedom in setting policy goals. In that way, her second team has a greater chance of success.