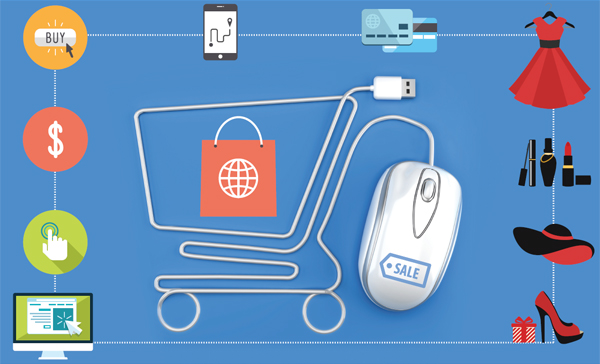 Kim So-ye is a mother of a 6-year-old daughter who enjoys online shopping just like everyone else her age. The homemaker in her early 30s purchases most of the items needed for her child - such as bath products, clothes and snacks - on the Internet. These items, she says, are purchased directly from foreign websites.

“Before my child was born, I wasn’t this passionate about making direct purchases from foreign websites and shopping malls like Janie and Jack, iHerb and Amazon,” Kim said. “It was after my daughter was born that I became more interested, particularly in buying children’s products because imported ones here in Korea are very expensive.”

Kim said she makes overseas orders twice every month. And each time, she makes sure that the total payment does not exceed $100, including delivery, so she wouldn’t have to pay the customs duty.

“Although making overseas orders online can be a little bit confusing at first, once you get used to it, it saves you a lot of money because items are way cheaper when buying from overseas manufacturers directly than the price you would pay in Korea for the same ones brought in by importers,” she said. “I’m very satisfied with the quality as well.”

Young and tech-savvy consumers like Kim are introducing a new paradigm in the country’s retail industry. And with a growing number of consumers like Kim, traditional retailers like department stores and discount stores that were once considered a unique and exclusive retail channel are struggling to make a profit.

Kim said that before she started buying foreign products directly from online stores, she was a frequent visitor to shopping outlets, department stores and discount stores. Now, she chooses to buy even little things like plastic cups, honey and cookies for her daughter online.

According to the Korea Customs Service, the total amount of direct purchases made from foreign websites jumped from $707.2 million in 2012 to $1.04 billion last year. The number of purchased items also surged from $7.94 million to $11.16 million over the same period.

Of the items that have been brought into the country directly by consumers from January to April, 27 percent were apparel and shoes, 14 percent health food, 8 percent cosmetics and another 8 percent purses and handbags.

In the past, a majority of items purchased by consumers through overseas online websites were mainly clothes and health food, but products have diversified to include even electronic goods manufactured in Korea sold in other countries if they are priced lower.

“There is a big change happening in the local retail market as online shopping globally has become more popular,” said an official from Ebates, an online shopping website that offers cash back on purchases. “Korean consumers now are able to buy items from overseas online websites at their original price. In the past, they were only available through local importers and retailers.”

The official added that “people who are trend conscious are also able to buy items directly without waiting for an official launch in Korea, and even if they were released in the local market they wouldn’t be able to buy them at cheap prices.”

“The trend is most likely to continue unless the country’s overall retail structure gets reorganized to make the price of imported items cheaper or similar to the price tag of direct online purchases,” the official added.

A recent survey conducted by the Korea Chamber of Commerce and Industry of 1,650 online shoppers showed one in four regularly buy foreign items directly from overseas websites. Of them, 67 percent picked price as the main reason why they choose such a buying channel, while 37.8 percent said they’re able to buy brands that cannot be found in the Korean market.

“A majority of consumers buying items directly from overseas websites are young,” said an official from the KCCI. “Many of them learn about the purchasing procedure via social networking sites and blogs, where there are many posts on how to efficiently shop from foreign websites.”

Industry experts note that it has become more convenient for Korean consumers to purchase items directly from foreign websites, although there are language barriers. In the past, consumers had to endure inconveniences like long delivery processes and concerns that ordered items might get lost on the way. Today, however, there are Korean delivery agencies set up in countries like the United States that do the delivery work for consumers. This way, consumers can save on costs because sending items directly from foreign websites is more expensive than shipping them domestically. Some foreign websites also do not deliver overseas.

Malltail is a delivery and shipping agency that is commonly used by consumers who buy directly from foreign websites. It has warehouses in the United States and China that store items bought by Korean consumers online and send them to Korea. It also offers consumers insurance on the items they buy should they be damaged on their way to Korea.

“We can say that social networking sites and online communities are one of the reasons why direct shopping among Korean consumers has surged,” said an official from the retail industry. “Consumers tend to feel somewhat uncertain about buying products online, but with so much information on SNS sites and blogs there’s more credibility among consumers now that they are able to buy quality items at reasonable prices.”

Also, with Korea being one of the most wired countries in the world, there is abundant information online about various prices of luxury items and imported goods.

“After I started buying products directly from overseas websites at very cheap prices, I started to doubt the prices tagged by local importers and retailers at department stores and road shops,” said Kim Min-jung, a 32-year-old homemaker. “I feel like a fool paying the tagged price. It feels as if I’m getting ripped off.”

The Korea Consumers Agency, a private consumer group, conducted a study into the prices of 360 luxury items from brands like Louis Vuitton, Gucci, Burberry, Chanel and Prada from June 2011 to May 2012. The study showed that despite the fact that Korea had a free trade agreement with the European Union that took effect in July 2011, the prices increased even though tariffs went down.

Another study by the Korea Customs Service showed that between December and February, major imported products in Korea sold for 2.7 to 14.9 times higher than their import prices.

Other items like bottled water, strollers and wine were 10 times more expensive than their actual imported prices.

According to the Ministry of Strategy and Finance, sales growth at local department stores in April fell 1.4 percent from the previous year. This is a steeper fall from March when year-on-year sales dropped 1.1 percent.

Although industry sources note that there are many reasons for the sales drop at department stores - like the lingering bad economy and the Sewol ferry sinking in April that left the whole nation in grief and cut down on spending - one major reason is that consumers, especially those who were big buyers of luxury items, no longer visit department stores.

Recent data by the Ministry of Trade, Industry and Energy showed that in April, sales of foreign brands plunged 15.4 percent at local department stores compared to the previous month. This led all major stores including Shinsegae, Lotte and Hyundai to begin their semiannual sales of premium brands earlier than usual with more items being offered.

“Many consumers have turned their backs on us and have turned to other retail channels like outlets and online shopping,” said an official from Shinsegae.

And there are concerns being raised over the negative impact direct purchases from overseas websites are having on the domestic economy.

According to the Bank of Korea, domestic spending in the first quarter grew 0.2 percent from the previous quarter. This is lower than the fourth quarter’s growth of 0.6 percent.

“The more popular direct online purchases are in a country, the higher probability that its retail industry is more closed,” Kang Joong-koo, a researcher at LG Economic Research Institute, wrote in a report recently. “Also, there is a high possibility that in such a country, there are some dominant retailers that collect exclusive, excess profit.”

The government is aware and concerned at the same time that this trend could hurt the domestic economy. Earlier this year, the government announced measures that focus on diversifying import channels, for example, by having more small importers in the market. This would increase competition with existing exclusive importers and in the end help bring down consumer prices.

“To hold on to consumers who shop directly from overseas websites, local retailers should provide import products at a more reasonable price by allowing more small importers in the market,” said Kim Kyung-jong, head of the GS1 Korea, an organization under the KCCI that aims to improve supply chain management in the country. “At the same time, local manufacturers should try to improve the competitiveness of domestic items.”