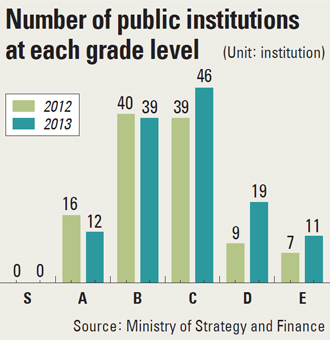 More public institutions got poorer grades in the latest government evaluation, alarming the public sector as it faces mounting pressure to reform from President Park Geun-hye’s drive to root out lax management.

In the report, the government recommended that the heads of Ulsan Port Authority and Korea Testing Laboratory be asked to step down by the institutions’ boards.

Ulsan Port Authority head Park Chong-rok was asked to step down because he has served in the position for more than two years.

The government also asked Namgung Min, president of Korea Testing Laboratory, to leave his post because the institution received a D for two years in a row and had showed no improvement.

The Finance Ministry’s evaluation was conducted on 117 public institutions and the overall number that received poorer grades increased compared to 2012.

None of the organizations were given an S, which is the highest level in the evaluation.

Korea Trade Investment Proamotion Agency (Kotra) and Korea Education and Research Information Service were the only two that received an A, the second-highest grade. In 2012, 16 institutions got an A.

But institutions that got a C, D or E climbed remarkably.

The government decided to provide salary incentives to the 87 institutions that received a C grade or higher.

However, Kepco, K-Water, Korea Expressway Corp. and three others will get half the incentives they received in previous years.

In addition to wage incentives, the two A-level institutions will be given a 1 percent increase on their budgets, while those below D-level will have a 1 percent budget cut next year.

Twenty out of 30 public institutions that the government was closely monitoring received lower grades for their 2013 performances than in 2012, the ministry said.

“The ministry evaluated the public institutions with stricter standards than before, so many of them got poorer grades,” said Hyun Oh-seok, outgoing finance minister and deputy prime minister for economy. “The 2013 evaluations of the institutions were made before the government established the normalization plan for the public sector, so we expect better results in a mid-term evaluation in September.”