A Pink’s Jung gives thanks for ‘Music’

A Pink’s Jung gives thanks for ‘Music’ 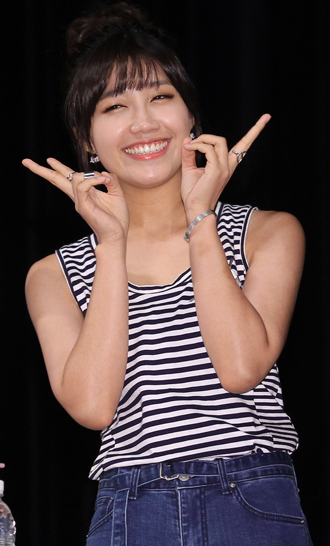 Jung Eun-ji of A Pink expressed her thoughts about taking up the main role in the new KBS drama “Lover of Music” during a press conference yesterday at the Grand Ambassador Seoul, central Seoul.

“I didn’t know that I would play a lead role in the public broadcaster’s drama so soon,” said the 20-year-old Jung.

“It’s not been long since I started acting and I want to say thank you to the producer who gave me such an opportunity. … I think getting familiar with the crew was the most crucial thing for me to do to get the hang of all the nervousness.”

Jung debuted in the entertainment industry as a vocalist in the all-girl idol group A Pink in 2011. However, due to the mature acting skills she showed in her debut drama “Reply, 1997,” Jung rose as one of the most successful singers turned actors.

“Lover of Music” features Ji Hyun-woo as the male lead and has a rom-com plot line themed around trot, or the traditional ballads of Korea. The first episode airs on Monday.