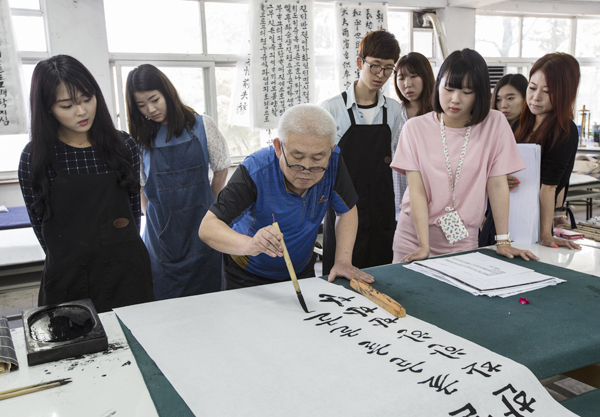 Yeo Tae-myung, a professor at the Department of Calligraphy and Cultural Art at Wonkwang University, gives a calligraphy demonstration to students. The university headquarters recently announced the abolishment of the department, which brought strong resistance. By Cho Yong-chul

The phrase means that only when people read many books and enhance themselves through culture will the characters they draw have a literary sense and will reflect the forces of the books they have read.

Like this, seoye, which literally means the art of lettering, or East Asian calligraphy, is not just about the technique that emphasizes the shape of the letters but the art of expressing one’s intellect.

East Asian calligraphy, which uses letter forms to express ideas and emotions, developed over thousands of years in Korea, China and Japan, where Chinese characters are still commonly used.

But calligraphy is losing its popularity in Korea whereas it is still popular in China and Japan.

Peng taught Obama how to hold an ink brush and Obama gifted Peng with a painting of the Chinese character “longevity,” which she penned herself. Peng expertly drew with brush strokes to write a four-character idiom meaning “generous virtue tolerates all creations” from an old Chinese classic text known as “Book of Changes” and gave it to Obama.

In Japan, at an elementary school in Ishinomaki, Miyagi Prefecture, eastern Japan, which was a region affected by a large earthquake last November, Caroline Kennedy visited a fifth-grade calligraphy class 10 days after being appointed the U.S. ambassador to Japan.

In similar ways, China and Japan are making effective use of calligraphy as part of cultural diplomacy.

And how about in Korea? The walls of the Department of Calligraphy and Cultural Arts in Wonkwang University’s Art College, located in Iksan, North Jeolla, are covered with bold black ink calligraphy and graffiti that read, “Save the Calligraphy Department.” 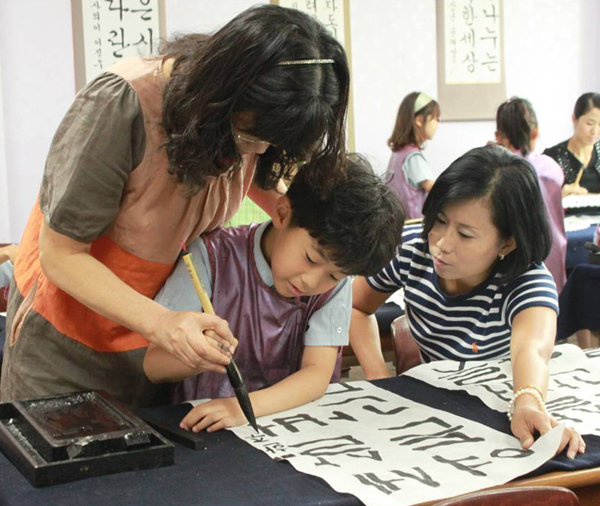 The decision to abolish the calligraphy department, which was established in 1989 as the first college department of calligraphy in Korea, brought anger and disappointment.

In early April, the university headquarters made the final announcement to close the department due to a lack of enrolling students.

“The calligraphy department, which was once the school’s pride, has become the victim of college restructuring,” sighed department head Yeo Tae-Myung.

And the remaining calligraphy departments in Daejeon University and Kyonggi University are having difficulties sustaining themselves.

“Pure art such as calligraphy has low chance of surviving university restructuring that are made only on economic conditions,” said Keimyung University professor Kim Kwang-wook. “The government should take special measures to revive Korean calligraphy.”

“Most of all, the overall mood of neglecting traditional culture in society is the problem,” Yeo said.

Calligraphy rapidly fell into stagnation from the late 1990s. With the start of digitalization, the culture of calligraphy dramatically receded with the changing notion that letters aren’t meant to be written but typed. It was a difficult environment for calligraphy to survive in.

Nowadays it’s hard to find Korean politicians writing New Year’s slogans with an ink brush like they used to.

Calligraphy hagwon for children, which were once as popular as taekwondo hagwons, are also slowly disappearing. Now, calligraphy classes are rarely taught at elementary, middle or high schools. The truth is that it’s even difficult to open an after-school program due to a lack of participants.

Visitors to the Calligraphy Museum at Seoul Arts Center are greatly lacking compared to those at art galleries and other exhibits. In the case of Gangam Museum of Calligraphy, located in Jeonju, North Jeolla, most students in its calligraphy class are senior citizens who are nostalgic about the brush-writing generation. 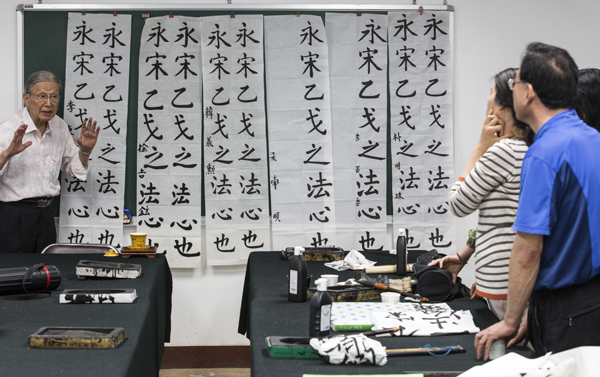 At the Gangam Museum of Calligraphy, located in Jeonju, North Jeolla, most students in the calligraphy class are senior citizens who are nostalgic towards the brush-writing generation. [JoongAng Sunday]

The renouncing of the calligraphy department at Wonkwang University, a leading facility continuing Korea’s calligraphy culture, came as a shock to both China and Japan.

“There needs to be an effort to preserve traditional culture while seeking new paths for growth,” he emphasized.

“Calligraphy is the essence of Asian culture,” said Zheng Xiaohua, Ph.D. Supervisor and Deputy Dean of the School of Arts at Renmin University. “At this point, when East Asia’s economic prosperity and extension of national power is increasing attention about Eastern culture from all over the world, it is crucial to revoke the notion of annulling the calligraphy department,” said Zheng.

From 1999, up to 70 universities followed Wonkwang University’s example. Gearing up to be a world power alongside the United States at the turn of the 21st century, China has been taking serious measures to revive its traditional culture. Its determination to reclaim a cultural status that matches its military and economic power is visible in many instances. 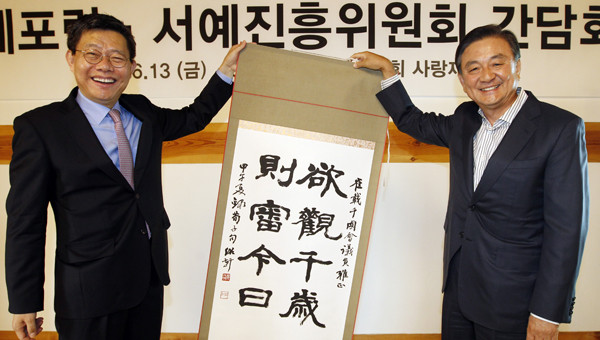 “In China, learning calligraphy is mandatory in many elementary, middle and high schools,” said Zhang Ke, 37, who is studying abroad at Wonkwang University.

But China’s calligraphy faced a dark period during the Cultural Revolution of the 1960s to the 1970s, during which traditional culture was suppressed. Only after Deng Xiaoping’s gaige kaifang reform program that emphasized the importance of tradition did calligraphy regain its past glory.

Now, calligraphy is accepted as one of the three great Chinese cultural traditions along with Hanzi (Chinese characters) and Confucianism.

Fortunately, five million calligraphers in Korea have begun to raise their voices to stop the fall of Korean calligraphy culture.

Representative Choi Jae-Cheon of the New Politics Alliance for Democracy has led the movement to legislate measures to help revive Korean calligraphy. He has operated the “Calligraphy Promotion Policy Forum” since last November with other legislators and government officials.

The forum made several achievements including securing the budget for the renovation of the Calligraphy Museum at Seoul Arts Center.

The forum also helped launch of the Calligraphy Promotion Committee. The committee consists of 99 leading figures in the fields of politics, journalism, arts and culture. Hong Seok-hyun, chairman of the JoongAng Ilbo and JTBC, has been designated as the initial chairman of the committee, which will hold its inaugural general meeting on Sept. 19.

“It’s important to cultivate teachers or leaders who can properly teach calligraphy in schools or hagwons to expand the base [for calligraphy],” said Lee Dong-guk, curator of Seoul Arts Center Calligraphy Museum. “Hangul’s widespread use is largely related to the retraction of calligraphy.

“There’s a need to actively instill the idea that Hanzi is also an important part of our culture,” Lee added.

Calligraphy is regaining attention from psychological educators who see it from a “healing” perspective. All the students of the Asan Academy, run by the Asan Institute for Policy Studies, are learning calligraphy.

Though Wonkwang University’s calligraphy department is on the edge of being abandoned, the liberal arts class “Life Calligraphy” has 100 students. Established in 2012, this course is one of the most popular at the school. “I don’t specifically teach calligraphy techniques for students,” said Professor Kim Su-cheon. “They are expressing themselves freely as the brush strokes guide them.”

According to Kim, students should teach themselves calligraphy: from how to hold the brush to how to draw a stroke. The idea is based on “synderesis,” the innate ability in humans to judge and act without depending on education or experience.

Though a little behind in the West where art, music and aromatherapy take place for relaxation purposes, calligraphy treatment that reflects East Asian sentiment is gaining attention.

“Calligraphy helps blood circulation and strengthens the lower part of the abdomen as it uses the hand and the elbow. It makes Zen meditation and contemplation possible and has been proven to help mental health” said Professor Kim.

Especially with the National Assembly’s current Humanism Education Promotion Act (aka the Lee Jun-seok Prevention Act) after the Sewol ferry tragedy, calligraphy is considered by many to be the best candidate to educate people on looking out for others. Practicing calligraphy will break down the “only I matter” kind of attitude and provide a short cut in recovering basic morality and ethics.

Calligraphy can also act as a mediator to ease the rising tensions in East Asia regarding past historical and territorial issues. At the Northeast Asia Trilateral Forum that assembled last year, there was an agreement to find common ground through calligraphy, which is called shodo and shufa in Japan and China, respectively.