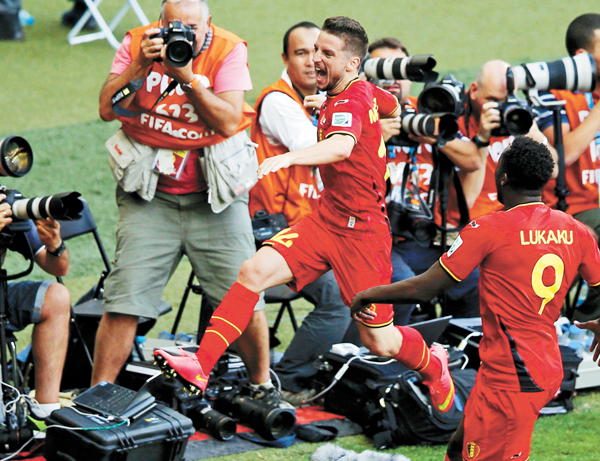 Waiting and waiting for an equalizer, the tension started showing on the faces of the Belgium players as the second half wore on in the country’s first World Cup match in 12 years.

Algeria was on the verge of a major upset in their Group H opener Tuesday, taking the lead through a penalty in the 25th minute. Try as they might, Belgium’s attacking players just couldn’t break down Algeria’s defense.

In the end, it was the Belgian bench that found the way, with substitutes scoring twice for a 2-1 come-from-behind win.

“We tired them. We just tired them down,” said Belgium Coach Marc Wilmots. “I told them, ‘Don’t worry, we will score.’’’

Algeria’s surprising lead stood for 45 minutes until Marouane Fellaini’s strong glancing header, with his back to goal, from a Kevin De Bruyne cross in the 70th.

Fellaini, who many thought would start the match, had only come onto the pitch five minutes earlier and was Wilmots’ final substitution.

Dries Mertens’ right-foot strike beat Algeria’s goalkeeper in the 80th after Eden Hazard saw him free on the right and set him up for the decider. Mertens, who went on at the start of the second half, sent his shot high in the net outside of Rais M’Bolhi’s reach.

The Algerians started brightly, but faded toward the end against Belgium’s unrelenting attack.

Belgium, widely billed as the favorite in Group H, next plays Russia.

Algeria dominated possession in the opening minutes, surging forward and moving the ball with flair. Belgium eventually settled down and regained control, ending the match with 65 percent possession.

Wilmots brought on Mertens for Nacer Chadli after halftime to give Belgium more of an attacking edge.

He also took off lone striker Romelu Lukaku, who was left stranded and had a disappointing match, and replaced him with Divock Origi in the 58th.

He made his final substitution in the 65th when he brought on Fellaini for Moussa Dembele to give the team more of a physical presence.

“We had to be patient, and we had the weapons on the bench to make the difference,’’ Wilmots said.