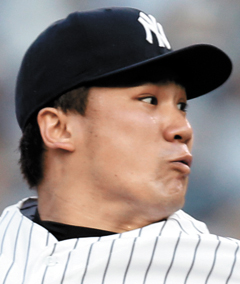 Masahiro Tanaka gave up a home run on the first pitch of the game, then earned his major league-high 11th victory of the season as the New York Yankees beat Toronto 3-1 on Tuesday.

That was the first time Tanaka could remember getting tagged so quickly and said it “threw me off my rhythm a little bit.’’

“Overall, my stuff wasn’t really there,’’ he said through a translator.

Even so, Tanaka (11-1) struck out 10 in six innings and left with an American League-best 1.99 ERA. He has made 14 starts this season - he’s gone at least six innings in every outing and never permitted more than three earned runs.

Brett Gardner hit a two-run homer off the right-field foul pole as the Yankees won at home against the Blue Jays for the 14th straight time.

Tanaka made his big league debut April 4 at Toronto, when Melky Cabrera hit a leadoff home run on the third pitch.

Jose Reyes provided an even faster start this time with a drive into the lower deck in right.

“I made up my mind before the game that I was going to swing at the first pitch,’’ he said. “You don’t want to face Tanaka with two strikes.’’

Said Girardi: “He just threw a pitch right down the middle and up. Reyes knew what to do.’’

Cabrera followed with a liner between Tanaka’s legs that knocked off the pitcher’s glove. But Tanaka scrambled to retrieve the ball behind the mound and threw out Cabrera, and never again allowed a runner past second.

Tanaka moved ahead of Toronto’s Mark Buehrle for the most wins in the majors. Buehrle starts Wednesday at Yankee Stadium in the middle game of the three-game series.

Trout’s three-run homer in the fifth broke a 3-all tie and capped a four-run inning. He added a leadoff homer in the seventh. The two-time All-Star was 3 for 5, extending his hitting streak to 12 games, and has reached base safely in 35 of his last 36 contests.