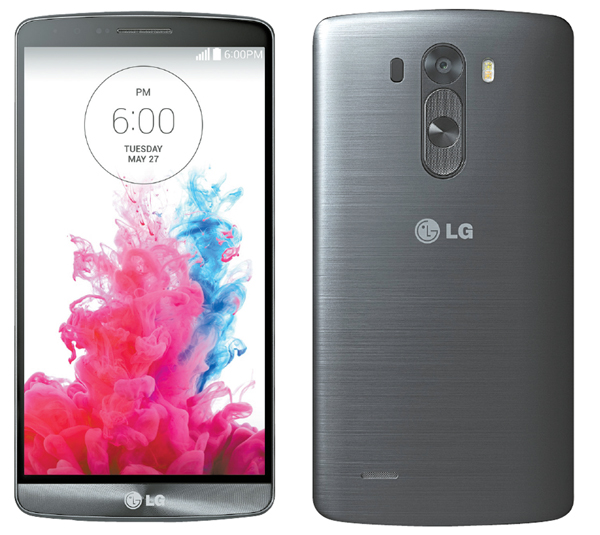 LG Electronics’ G3 smartphone, released on May 28, is showing signs of becoming a big hit, with more than 200,000 units sold between its launch date and Sunday, according to the mobile communications industry.

An average of 5,000 G2s were sold per day. When the phone was launched, LG Electronics Mobile Communications CEO Park Jong-seok said LG expected to sell a total of more than 10 million G3 phones worldwide.

Should the high sales continue, the G3 could come close to LG Chocolate’s cumulative sales record of 20 million units in 2006.

In a test by the JoongAng Ilbo, G3’s round screen that shows the date and time through a hole in the phone case was a useful feature and gave the phone a unique look.

By sliding the circle to one side, the user can check messages and the pedometer, play music and take pictures without opening the case. The pedometer tells how far the user has walked and how many calories they have burned. The four quick functions on the circle can be changed to suit users’ preferences.

The rounded back of the metal frame and the lower volume button make the phone comfortable to hold.

The camera, which is often cited as the biggest weakness of an LG smartphone, has been improved dramatically since the G2 and has become one of the phone’s advantages.

The new laser autofocus quickly finds the subject and renders a sharp image by using an invisible laser beam.

The autofocus is resistant to shaky hands and the phone’s antishake OIS Plus software corrects photos of moving objects or photos taken in dim lighting. G3 users have said that the clarity of the pictures is as good as those taken with a digital camera.

The front camera has also been upgraded. To take a selfie, the user can unfold and clench his or her hand, then the camera will take a picture three seconds later.

Ninety-three percent of LG Electronics’ smartphone sales come from overseas for all of their smartphones.

For the G3, LG chose a quad HD (QHD) display, which other smartphone manufacturers have shied away from. The advantages of QHD, which has twice the resolution of full HD, are noticeable in the landscape photos that are preloaded in the phone’s photo gallery.

The size of the screen has been increased to 5.5 inches from the 5.2-inch G2 display.

The phone has been highly acclaimed by foreign media. IT news website CNET praised the G3’s screen and fast auto focus, and said the product could potentially bring a shift in the existing smartphone market.

However, there are concerns over operating the QHD display on a smartphone: The screen might not move as smoothly as expected and could quickly use up the battery.

The G3 has a Qualcomm Snapdragon 801 processor, which gives it a top wireless Internet speed of 150 Mbps. But LG’s competitors are creating products that combine QHD display and the next-generation Snapdragon 805 processor.

The updated smartphone will have a QHD screen and will have LTE-A with a download speed of 150 Mbps.

Its Snapdragon 805 processor shows graphics with 30 percent higher quality than Snapdragon 801, but it is difficult to tell the difference.

“The LTE with a maximum speed of 75 Mbps and LTE-A with the speed of 150 Mbps do not make a big difference in daily lives,” said a spokesman for a mobile carrier. “The broadband LTE-A will be the same.”

“G3’s battery consumption and screen are optimized with the high-resolution display and we are confident it will compete well with next-generation products, unless users are most interested in playing 3-D games with smartphones,” said a spokesman for LG Electronics.