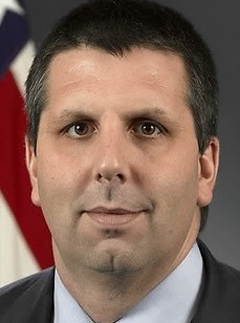 Mark W. Lippert, the chief of staff to U.S. Secretary of Defense Chuck Hagel, said this week that as the next American ambassador to Seoul, he would push to “encourage dialogue back and forth” between Japan and Korea.

The 41-year-old Navy veteran, who was nominated by President Barack Obama last month as the United States’ top envoy to Korea, pledged on Tuesday that he would improve relations between Seoul and Tokyo at the Senate’s Foreign Relations Committee hearing in Washington, as relations have remained icy between its two Asian allies.

The hearing was presided over by Maryland Senator Ben Cardin and attended by Arizona Senators John McCain and Marco Rubio.

Lippert added that while U.S. Ambassador to Japan Caroline Kennedy, the State Department team back in Washington and he “wouldn’t play a mediation role, [they] obviously would have conversations to encourage better dialogue between the Japanese and South Koreans to work through some of these very difficult and painful historical issues.”

He further noted that the U.S. has pushed for trilateral cooperation through the Shangri-La Dialogue in Singapore, which brought together ministers from the two Asian nations, as well as a meeting in March with President Obama, Japanese Prime Minister Shinzo Abe and President Park Geun-hye on the sidelines of the Nuclear Security Summit in The Hague.

In addition, the newly tapped ambassador urged the Japanese government to be transparent in explaining its constitutional reinterpretation and policy reforms to the Korean government over enabling its right to collective self-defense, which he described as “a touchy subject.” He also called for a “better job of making sure that there is a good outreach and information exchange” on the issue.

Lippert, one of Obama’s key confidants, is a security expert with a solid background in Asia, having served as the assistant secretary of defense for Asia-Pacific security affairs in the Obama administration from 2012 to 2013.

He is on track to replace current U.S. Ambassador Sung Kim, who has served as the first Korean-American envoy to Seoul since November 2011. If confirmed by the Senate, Lippert will be the youngest American envoy to Korea.

“It is by far in U.S. national security interests that the Republic of Korea and Japan have a good relationship,” he said.

In addition, Lippert expanded on several plans for moving forward on the North Korea issue. If he is confirmed, one of his key priorities would be continuing to build an international consensus to isolate North Korea, which would also shift the focus toward its human rights record.

He also urged continued pressure such as multilateral and unilateral sanctions and military exercises “to keep North Korea in check and to send a strong signal that the U.S. is watching their behavior.”

“What I’ve been working on at the defense department,” he said, “is strong defense and deterrence.”

That would include increasing the number of ground-based interceptors in Alaska, upping the movement of the Terminal High Altitude Area Defense (Thaad) missile defense system on Guam, adding a second tracking radar in Japan and deploying two new ballistic missile defense cruisers by 2017, “to ensure that we stay one step ahead of the North Korean threat both in terms of our homeland and our allies.”

During the hearing, Lippert touched upon fuller implementation of the Korea-U.S. free trade agreement and the renewal of a bilateral civilian nuclear accord, which has remained pending.

“The alliance between the United States and the Republic of Korea is one of the most important relationships that we have in the world,” he said in his address to the Senate.

The ambassador nominee once served as an aide to Leahy, who is the president pro tempore of the Senate and the chairman of the judiciary committee. “His breadth of knowledge and perspective on security, economic and humanitarian challenges we face in East Asia and the Pacific are significant,” the senior senator said.