Parliamentarian at the center of bribery scandal

Parliamentarian at the center of bribery scandal 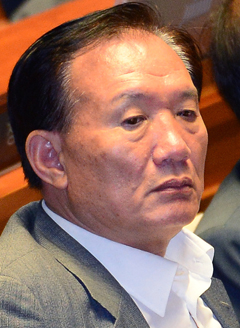 A bribery scandal surrounding Representative Park Sang-eun took another turn yesterday after prosecutors found stacks of cash in his son’s house during a raid over the weekend, sparking speculation that the money may have been illegal funds from those seeking the parliamentarian’s favor.

The discovery is another blow for Park, a two-term Saenuri Party lawmaker who represents two Incheon districts. He has been engulfed in controversy since his former driver accused him of accepting bribes for various ends.

According to a special investigation team at the Incheon District Prosecutors’ Office tasked with uncovering corrupt links between officials and the shipping industry in the wake of the April 16 Sewol ferry accident, authorities seized stacks of cash, including U.S. dollars, worth more than 600 million won ($586,800), which is believed to have come from opportunistic businessmen and aspiring politicians.

Prosecutors suspect Park took the money in exchange for helping certain individuals win the Saenuri nomination in the June 4 local elections or for doling out special favors to local shipping industry companies.

According to the JoongAng Ilbo, Park reportedly said he has nothing to do with the assets. Prosecutors are now looking into the money’s origins and plan to summon Park for questioning soon. The discovery of the cash is the latest in a string of allegations against Park concerning his abuse of power as a lawmaker.

On June 11, the ruling party lawmaker reported to the police that a bag stuffed with 20 million won in cash and some important documents had been stolen from his car.

His driver was initially pinpointed as a key suspect in the theft.

However, it was later reported that Park’s driver had, in fact, submitted the money to the Incheon District Prosecutors’ Office, accusing his boss of taking bribes in exchange for favors and influence.

The lawmaker has denied the charge and maintains that his driver took the money to prosecutors after he was fingered by police for the theft. Park said the money was to pay his lawyer for legal cases.

But it was later discovered the money inside a beg amounted to 30 million won, not 20 million won alleged by Park, raising questions over authenticity of the lawmaker’s claim as he did not even know the exact amount.

Since then, a slew of other allegations have emerged concerning Park’s intimate relations with private businesses as well as his conduct as a lawmaker.

On Tuesday, one of Park’s former staff members publicly accused the lawmaker of misappropriating his salary by forcing him to donate half of it to him.

“I was pressured to donate half of my monthly salary [1.5 million won] as a contribution to his office,” Jang Gwang-hoon, a former aide, said Tuesday in a radio interview with CBS.

Park again denied the charge, saying the contribution was voluntary.

According to the prosecution, Park also went on overseas business trips sponsored by the Korean Register of Shipping (KRS), which has been under intense scrutiny for its lax and dubious safety checks on the doomed Sewol ferry.

The KRS is the only Korean classification and inspection agency. The sunken Sewol was one of the 2,900 ships the KRS inspected.

In the report, the KRS said it checked and approved the Sewol’s stability in the water through an inclining test conducted in January 2013. The KRS’s full inspection report of the ferry is available on the KRS website.

It added that it confirmed that all cargo was properly secured within the ship. However, one of the biggest questions revolving around the tragedy is whether its cargo, particularly the vehicles it was carrying, may have come loose or not been anchored altogether.

Following the sinking, which left nearly 300 people dead, the prosecution launched a special investigation team dedicated to laying bare the collusive ties between government officials and the shipping industry, including the KRS, to find out what ultimately led to the accident.