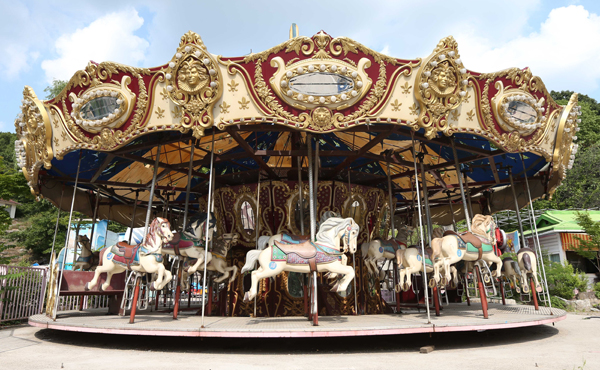 Yongma Land, the once operational amusement park in Jungnang District, eastern Seoul, closed in 2011 after it failed to turn a profit. But after it was featured in popular music videos and dramas, visitors drastically increased. By Oh Jong-teak

The Yongma Land amusement park in eastern Seoul is something of a peculiarity in an otherwise bustling megacity. The rides there have stood idle for a few years now, weathered and worn. But their faded, chipped paint only add to the venue’s eeriness and its remote atmosphere.

The park, situated in Jungnang District, was shuttered in 2011 after failing to turn a profit but has experienced a resurgence as of late. Its haunting mood and vintage feel have attracted dozens of people, from families to amateur photographers and entertainment producers.

And though its rides are no longer in operation, the grounds remain a sight to behold. Even the carousel, with its white, saddled horses and dilapidated canvas roof, can still rotate.

“The color faded, but I have no plans to repaint it,” said Youn Seong-gu, who manages Yongma Land. “This amusement park has its own atmosphere, and the faded, old colors are one of its artistic elements.”

The venue first experienced a rebirth after it was featured in singer Baek Ji-young’s music video for her 2012 ballad “Hate,” which thrust it back onto the public’s radar. That was followed by girl group Crayon Pop’s music video “Bar Bar Bar,” a catchy dance number that was filmed on the grounds.

It has also since made its debut onscreen as a rendezvous spot in the action-thriller film “The Target” (2014) and the JTBC drama “Heartless City.”

“Yongma Land is the only abandoned amusement park that held onto its rides after closing,” said Lee Song-yeong, the president of Loyal Quest, which rented Yongma Land for the filming of “Heartless City.” “It’s popular among producers for its accessibility and artistry.”

Its brush with fame prompted a major uptick in visitors, and about 20 to 30 people come through each weekend to take photos or simply look around. Passersby were always welcomed in the park, even after it closed, though an entrance fee of 5,000 won ($4.90) was instated once pedestrian traffic increased to support its management.

Yongma Land first opened its doors in 1968 and was once crowded with visitors, boasting a slope for sledding and the biggest outdoor swimming pool in Seoul.

But as more entertainment facilities sprung up in the area, Yongma Land slowly lost its competitive edge. Its fate was ultimately sealed after the downfall of a neighboring sister business, a sports center established under the same owners that was intended to attract more customers to the park and other facilities in the area.

The center went bankrupt following an extensive fraud scandal in which its owners, faced with a shortage of assets, attempted to sell off the sports venue to several buyers.

The incident negatively impacted Yongma Land, and as visitors dwindled, the amusement park was finally forced to close its gates.

“I often visited the park with my children back then,” said Jang Jeong-seok, 58, who resides nearby. “The whole park was full of light, day and night, until about the early 1990s.”

But despite the hurdles, its newfound popularity has taken the venue in a new direction. Jungnang District and the property owners are considering ideas to support Yongma Land’s revival and transform it into a cultural complex, though the extent of those plans has yet to be determined.

But in the meantime, the dilapidated venue is continuing to benefit from its 15 minutes. “This park reminds me of my childhood,” said Ahn Jin-seon, a 31-year-old amateur photographer. “The merry-go-round is my favorite spot because of its faded antique color.”