Korea exudes positivity in training for victory against Algeria

Korea exudes positivity in training for victory against Algeria 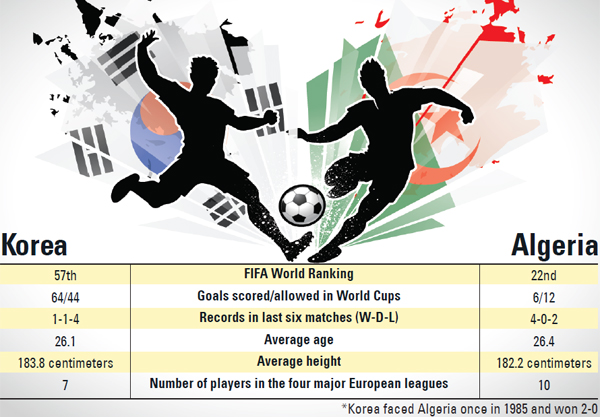 Earning one point against Russia wasn’t a bad outcome for Korea, but Coach Hong Myung-bo is looking for more against Algeria, the second World Cup opponent for the Taegeuk Warriors, whose priority is to advance to the second round.

In this circumstance, Korea is predicted to mobilize all of its firepower to pick up a first win in Brazil.

After the 1-1 match at the Arena Pantanal on Tuesday, local time, Korea yesterday returned to their base camp in Foz do Iguacu to start training for the match against the North Africans, which will be held in Porto Alegre at 4 a.m. Monday, Korea time.

The atmosphere on the training field was a lot more positive than last week when the team arrived at camp after a disappointing 4-0 loss to Ghana in Miami. Nothing could erase the smile on the face of forward Lee Keun-ho, who scored the team’s goal in the second half of the match, and the field was filled with the sound of players laughing throughout training, which was open to the public.

But Coach Hong said the sessions will be more serious starting today in order to improve his offense. “The match against Algeria might be a slugfest since we both want three points,” Hong said.

The coach didn’t say what he will work on over the next three days, but based on the match against Russia, the key to Korea’s offense will be its side attackers: Son Heung-min and Lee Chung-yong.

Many people noticed Son showing off his speed while controlling the ball and threatening the Russians, but Korea’s attacks were more efficient on the right side where “blue dragon” Lee played.

According to a match report by FIFA, 54 percent of the Taegeuk Warriors’ attacks came from the right side, while 23 percent were attempted from both the center and left side, meaning that Korea’s attack was imbalanced and inefficient. People might have been enamored with left wing Son’s dribbling skills and mid-range shots, but his attacking style did not work because of inefficient passing.

Son’s typical attacking route is to penetrate the center arc from the left, which he tried a few times against Russia. But when he makes those attempts, left wing-back Yoon Suk-young needs to move up from his defense position to support Son, but he wasn’t fulfilling that role on Tuesday, so Son’s only option was to dribble or take long-range shots.

Since the two are predicted to start in the second match, they need to study Lee Chung-yong and Lee Yong’s performance against Russia. Whenever Lee Chung-yong penetrated the opponent’s goal area, Lee Yong also moved in so they could make shorter passes to each other or to attract defenders’ attention, giving scoring chances to his teammates.

Another aspect that Korea needs to examine is Belgium’s goals against Algeria. Belgium put in 194-centimeter (6-foot-4) midfielder Marouane Fellaini when they were trailing 1-0, and he perfectly met Coach Marc Wilmots’ expectations with a game-tying header.

Coach Hong might want to replicate the scene with his team’s 196-centimeter striker Kim Shin-wook, who was the leading scorer in the K-League Classic last season.

“We focused on recovering our stamina today,” captain Koo Ja-cheol said yesterday. “We will study Algeria’s recent matches with videos starting tomorrow, but I think we all know what we need to do.”