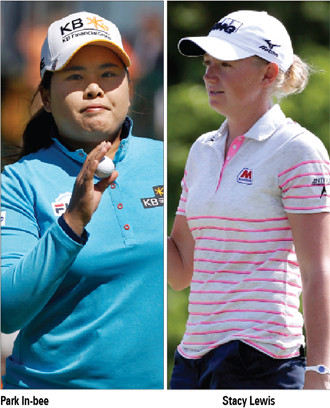 Just four days after Germany’s Martin Kaymer won his second major title in the U.S. Open played at Pinehurst Resort in North Carolina, the top women’s golfers will tee off at the same venue vying for the U.S. Women’s Open.

Korea’s best female golfer Park In-bee, Korea-American world No. 1 Stacy Lewis, and third-ranked New Zealander Lydia Ko have commanded much of the attention ahead of the season’s second women’s major where all three are among the favorites.

Also front and center in the media spotlight has been American Lucy Li who, at the tender age of 11, became the youngest ever to qualify for the U.S. Women’s Open after going two under par in her sectional qualifier last month.

Li first tasted the limelight by winning her age group at Augusta National’s inaugural Drive, Chip and Putt Championship before the Masters in April, and she has charmed the fans during Pinehurst practice with her zest for golf and life in general.

With her hair in pigtails and a readiness to smile and giggle at every opportunity, she does not take herself too seriously and is determined to make the most of her first experience at a women’s major.

“The perfect week, I just want to go out there and have fun and play the best I can and I really don’t care about the outcome,” Californian Li told reporters while preparing for Thursday’s opening round at Pinehurst.

“I just want to have fun and learn. I want to learn a lot from these great players.”

Li is not the youngest player to participate in the U.S. Women’s Open. Beverly Klass was 10 when she competed in the 1967 championship, prior to the qualification process.

While Li aims to make the most of her week at Pinehurst, Park will be bidding to become the first player since Australian Karrie Webb in 2001 to win back-to-back U.S. Women’s Open titles.

By her own lofty standards, Park has struggled with her putting for much of this season but appears to have turned that around and celebrated her first win of the year at the Manulife Financial LPGA Classic this month after closing with a 61.

“My putter wasn’t working so well the past four months, but it seems like it’s slowly coming back,” said Park, who won three majors in 2013 to cap an astonishing campaign.

“It started a couple of weeks ago, especially in Manulife - the final round gave me so much confidence. I just wasn’t able to hole anything, but the Manulife tournament was a big win for me.”

Top-ranked Lewis, who clinched her first major title at the 2011 Kraft Nabisco Championship before adding a second at the Women’s British Open last year, likes the look of Pinehurst’s No. 2 Course, which has swathes of sandy native waste areas and virtually no conventional rough outside the fairways.

“I love the golf course, I love the way you have to think your way around,” said the 29-year-old Lewis, whose best U.S. Women’s Open finish was a tie for third in 2008.

“It’s position golf, it’s ‘Where do I need to be for every hole location?’ and that suits my game. That’s the way I play every week, so I think I have that as an advantage.”

Korea-born Ko, aged just 17 and already a three-time champion on the LPGA Tour, will seek her first major victory after coming close last year at the Evian Championship, where she finished second behind Norway’s Suzann Pettersen.

“Winning a major championship ... it would be the top,” said Ko, who won her first two LPGA titles as an amateur. “Everybody strives to win tournaments, and the majors are the biggest out of them all. And that would do a lot with my confidence.

“I don’t know when that may be, but I am just having fun and enjoying the moment, and hopefully that will bring that [to] where I could hold a major tournament trophy.”