Chinese premier is loaded for bear

Chinese premier is loaded for bear 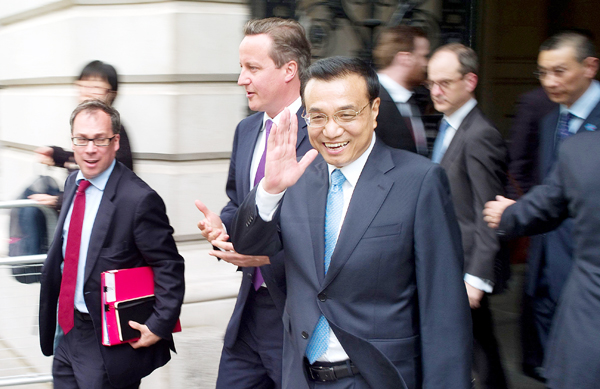 China’s Premier Li Keqiang has been visiting the United Kingdom this week and competing for headlines with Wayne Rooney. He’s done surprisingly well, too. Full marks to the government for giving its guest from Beijing an impressive reception, almost as if football was just a game. The message that China really, really matters as an economic partner may finally be getting through.

Li was granted a meeting with the queen, an honor rarely bestowed on deputy leaders. The government also announced a change in the United Kingdom’s policy on visas for Chinese visitors - which will be much to the United Kingdom’s advantage, given the surge in Chinese tourism.

On Wednesday I heard Li give a talk, and I was impressed. He was clear and purposeful. I wondered what my bearish-on-China friends would have made of it: second thoughts, maybe.

Li concentrated on the challenges of industrialization and urbanization. As he spoke, I wondered, how can analysts really believe there’s a nationwide housing bubble in China? As other Chinese officials have stressed in recent months, Li said that between 600 million and 700 million of China’s 1.3 billion people still live in the countryside - that is, urbanization still has a long way to go. He said that smoothing this process while maintaining growth in agricultural productivity as it goes on will be vital. He went into the need to establish secure property rights for some 200 million people already living in the cities, and to improve conditions for another 100 million living in the most deprived urban areas. Nobody could listen to his talk and accuse him of complacency.

He moved on to the need to improve the quality as well as the quantity of growth. Predictably, he insisted that growth can be maintained at around 7.5 percent; he also said that inflation, currently 2.5 percent, would not be allowed to rise above the government’s target rate of 3.5 percent. Importantly, policy would rely on “smart and targeted regulation” to achieve these goals, rather than broad stimulus measures. He addressed investors’ biggest concern head-on: “I can promise everyone honestly and solemnly, there won’t be a hard landing.”

A friend called this a “Draghi moment” - a reference to the famous promise made by the European Central Bank’s president that the ECB would do “whatever it takes” to keep the euro system whole. I recall thinking, when Mario Draghi made his promise, that the markets were initially underestimating the ECB’s determination; some accused me of getting carried away on the subject. In the same way, I think investors today are underestimating the Chinese authorities’ determination.

Li took questions from the audience, which was interesting, too, because he wandered comfortably off-script. I couldn’t tell you how many meetings with Chinese officials and businessmen I’ve had over the years - meetings that, let’s say, were lacking in spontaneity. Li defied the stereotype.

Perhaps this new mode is catching on. I recently led a panel at a U.K.-China business leaders’ summit. Two of the four panelists were Chinese, and they’d provided written comments in advance, leading me to expect lengthy formal statements as usual. As it turned out, they were relaxed and engaging, happy to respond to provocative questions. They were funny, too, and charmed the audience: They said the United Kingdom’s top priority should be to hire more and better Chinese chefs. I concur.

But that can wait. Football is happening.

*The author, a Bloomberg View columnist, worked for Goldman Sachs Group Inc. from 1995 until 2013, serving most recently as chairman of Goldman Sachs Asset Management.